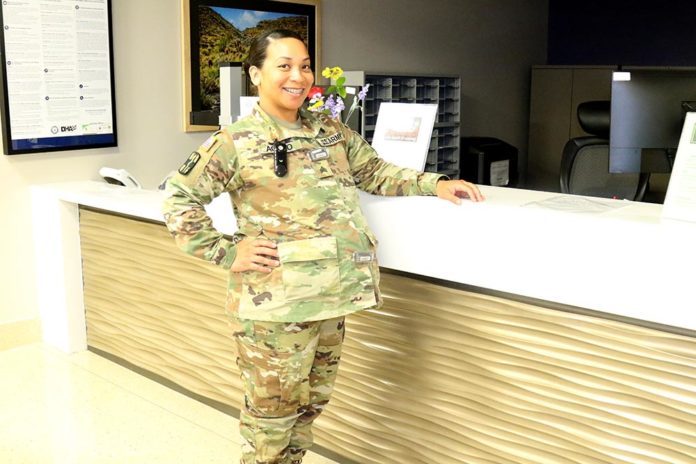 FORT IRWIN, Calif. — When Sgt. Courtney Aquino first found out about a national television show soliciting female soldiers or military spouses who are pregnant, she shied away from responding to the request.

“At first I was not inclined to sign up,” Aquino said. “I felt uncomfortable about sharing my news just yet and I am not really the type of person to project anything about my personal life.”

But she took her chances and told Freeform (formerly ABC Family Network and owned by Walt Disney Television) her story. Aquino was pregnant and wanted to surprise her (then) fiancé on his birthday. She said less than 48 hours later, she received a call from a show producer with general questions about Aquino’s military career and pregnancy.

“Then she asks a question I will never forget,” Aquino said. “‘Are you willing to keep that secret from him until after his birthday and tell him on our show?”

She said she was very apprehensive at that point and said it was a personal dilemma.

“With the job that I have, obviously I know how to keep medical secrets, but when it comes to my personal life, that was one of the most stressful times,” Aquino, who is an ANCOIC in the department of Radiology at Weed Army Community Hospital (WACH) said.

She had planned to tell her (now) husband, Jordan Hunt, for his birthday during a family event in Palm Springs in September 2018 and the show taping was also September 2018.

Aquino said she convinced herself that it was a happy occasion and the show producer promised her that she would appreciate it in the end.

Aquino told Hunt that the “Military Moms casting call” was interviewing female service members and their spouses/significant others about the hardships of being in the military and being a mother at the same time.

“He was, as always, supportive of whatever I asked of him and agreed to appear on the interview with me,” she said.

The show taping was Sept. 21, 2018, and Hunt was instructed to stay at Aquino’s home until the producers picked him up for the show.

Aquino met and waited at the Sandy Basin Community Center with 74 of Fort Irwin’s other active duty and dependent spouses who were pregnant or had recently delivered their babies. Food and childcare were provided.

“When all us were called into the next room, we had no idea what was in store for us next,” she said. “They opened up the curtain right behind them and it looked like a Christmas wonderland. They had fake snow, bells and whistles all over the table, there’s cameras set up and bright lights, Christmas cookies, ornaments, the stage was just intricately decorated. The walls were decorated and everything was specifically Christmas-themed.”

The women were then told the surprise hosts were entertainer (and DJ for The Ellen DeGeneres Show) Twitch and Allison Holker. The women were also told they were actually going to be guests of Freeform’s “Pop Up Santa” TV show, which was airing in December 2018. The Fort Irwin mothers then received hundreds of dollars in free baby items, including diaper bags, a crib, mattress, stroller and car seat combo, endless supply of diapers and wipes, baby books, mementos, picture frames, mobiles and many other newborn needs. They also received four passes to Disneyland for two nights.

The time then came for Aquino’s surprise baby announcement.

“I swear I could feel my heart almost rip out of my chest and I felt so faint I didn’t think I could go through with it,” Aquino said.

Aquino said she remembers all eyes and bright lights on her on stage and as she told her story, she could see Hunt waiting off camera.

“Reality set in, it was time,” Aquino said. “Jordan walked across stage towards me. I held his hand, looked into his eyes as I choked back the tears. All I could muster up was “Congratulations, Papa Bear.”

That was related to an inside nickname she said Hunt had mentioned he couldn’t wait to be called. Applause erupted and Aquino said she finally felt relief but that wasn’t it.

“I turned to exit stage as I heard Jordan say ‘wait a minute.’ When I turned towards him, he immediately dropped to one knee and held a little, white box with the most beautiful engagement ring I had ever seen.”

Aquino said she couldn’t breathe and the crowd and celebrity hosts gasped, then cheered.

“As soon as I came out of my cloud of disbelief I felt myself muster up the answer to the ultimate question of ‘Will you marry me?’” she said.

Aquino said she was shaking and said “of course” through tears

The “25 Days of Christmas: Pop Up Santa” show taping was in September 2018 and the show aired in December 2018. Aquino and four other Fort Irwin women were prepped to tell their stories and be featured, although only two were actually featured. The women included one who had just given birth the day before the taping, a woman who revealed her baby’s gender during the taping and another woman who gave birth to a set of twins.

The Fort Irwin women were involved with the taping for about seven hours for Fort Irwin’s 30-minute segment.

Aquino watched the show with her nine-year-old son. She and Hunt were married on Feb. 4 and plan to have a bigger ceremony after she delivers their baby boy.

Aquino and Hunt’s baby, Seth Michael August Hunt, is due to enter the world on May 8, which holds a very special meaning to her, as her baby will share the same birthday of her late father.

She said this is an experience she’ll never forget.

“This was truly one of the happiest moments in my life,” Aquino said.