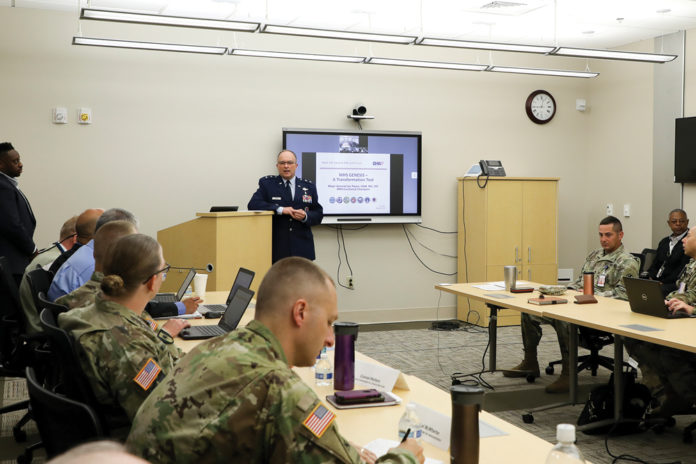 MHS Genesis replaces the stand-alone legacy systems (CHCS, Essentris, Ahlta) and integrates all aspects of care in the military health system into one, seamless portal. It connects the provider to the patient and offers a host of user-friendly features from messaging to prescription refills.

Patients will have access to their medical information from anywhere on the planet and that is one clear advantage of MHS Genesis.

Payne is an emergency-department physician with nearly 32 years in the military and in 2006, was charged with implementing the legacy electronic health record. He said although many people may want to keep that system, it’s time for change.

“The earlier systems served us well,” the general said, “But they are outdated in terms of security, safety and accessibility. What we hope to do better this time is to help you understand why we’re making this change and do a better job of helping you make the change.”

Payne said the changes are now about trying to save money.

“It’s basically to improve care,” Payne said. “To help us get to a more standardized approach across the whole military health system and reduce unwanted variability. We’ll see some areas where the system allows us to have more efficiencies. Overall, it’s not about reducing manpower, it’s about delivering better healthcare – from military entry all of the way to the VA.”

The MHS Genesis system is being deployed in “waves” depending on geography and infrastructure. It was initially deployed in the Pacific Northwest in 2017 as a test run for initial operational capability. Initial bugs and operational discrepancies were identified and corrected. The system will continue to be deployed throughout the Defense Health Agency between now and 2024.

Looking back on the launch of MHS GENESIS at initial sites in late 2017, the team gathered lessons learned, listened to feedback, and determined new ways to position the military health care network to communicate about the new EHR.