FORT IRWIN, Calif. — The most highly-decorated Japanese-American to survive the Vietnam War told the Fort Irwin community that despite the suffering, racism and even criminal acts against Asian-Americans following the bombing of Pearl Harbor, he knows he made the right decision to join the military.

“Looking back, I’m most grateful to my parents because they never expressed or conveyed any residual anger or bitterness about the internment,” the Honorable Vincent Okamoto said. “They said it couldn’t be helped and bad things happen in wars and said that America was our country and it was our duty to defend and fight for it.”

Okamoto said he and all six of his older brothers became service members, he said, because of the examples their parents set and what they instilled in them.

Okamoto was an Army Ranger during the Vietnam War and began his service in B Company, 2nd Battalion, 27th Infantry. He has served as a rifle platoon leader, infantry company commander, airborne ranger and intelligence officer attached to the Special Forces. When he retired from the military, he became a lawyer with the Los Angeles County District Attorney’s office and, eventually, became a judge. He was awarded Distinguished Service Cross for his valor in 1968, the Silver Star, the Bronze Star and three purple hearts.

Okamoto began his address at the Sandy Basin Community Center, by thanking those in the room who served during wars in Iraq and Afghanistan, which was more than half the audience.

The month of May is a time to recognize and celebrate the diversity in society through soldiers’ dedication and self-sacrifice.

“The embodiment of that diversity can be seen subscribed on the face of every one-dollar bill,” he said. “The Latin motto ‘E Pluribus Unum,’ translates to ‘Out of the many, One’ and that’s us.”

Okamoto told the audience they are the proud beneficiaries and link of a lineage of courageous and decorated men and women.

“This is a time to remember the lineage from which every soldier today came— the police officer who did two deployments in Afghanistan; veteran’s grandmother who worked in an evacuation hospital in Vietnam trying to save lives; the person who turned down a college football scholarship to volunteer to fight in the Korean War and now has a prosthetic hand; the old World War II veteran who once stormed a beach in Normandy on D-Day but now holds up the checkout line at the supermarket and still has nightmares; a former POW; a former Army Drill instructor from Fort Polk, Louisiana who may have never seen combat,” Okamoto said. 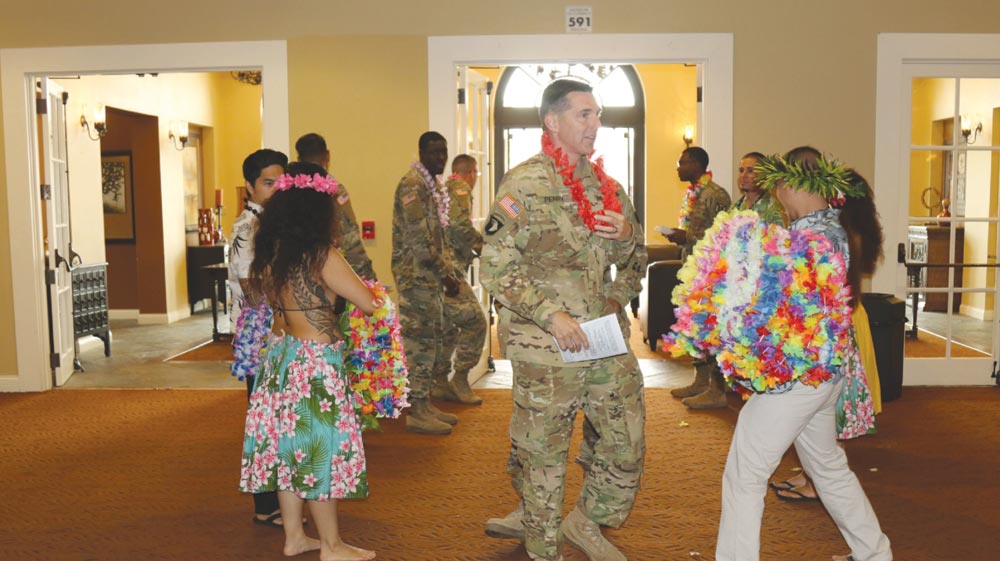 For Okamoto, his more recent lineage began when he was born in one of 10 government-operated internment camps in Arizona 1943 during World War II, following the bombing of Pearl Harbor.

He said that tragic event for Americans also impacted the lives of every person of Japanese ancestry living in America.

“All Japanese and Japanese Americans were looked upon with anger, fear and suspected of spies and saboteurs,” Okamoto said.

According to Okamoto, within weeks following the Pearl Harbor bombing, the FBI arrested Japanese community leaders, Buddhist priests, martial arts instructors and language speakers and held them in unknown locations for over a year. Japanese-Americans had their bank accounts frozen, firearms confiscated, their children forced to withdraw from school. He also said all Japanese-Americans working at the city, state of federal level were fired, and teachers and nurses were forced to resign. Japanese soldiers who were already in the military were suddenly ordered to turn in their uniforms and go home. He said Japanese-American males who tried to volunteer for the military and fight for their country were rejected and Japanese-Americans lost everything they owned– homes, businesses, cars, furniture and personal property.

“Then, without charge or trial, they were transported to remote, desert internment camps and forced to live inside barbed wire, surrounded by armed guards and machine gun towers,” Okamoto said.

Those residents were crammed into wooden barracks with no running water, communal latrines, mess halls and no privacy.

After World War II began, Japanese-Americans were not able to live as free citizens in American but the U.S. government said they could start to be drafted to serve in the military.

“But they didn’t need to be drafted,” Okamoto said. “In 1943 when the federal government finally allowed Japanese-Americans to join the military, thousands volunteered to prove their loyalty to America…and donned the same uniform as the guards who kept their parents and families locked up in the detention camps.”

Those soldiers were a part of the famed 442nd Regimental Combat Team and used their language skills of the military intelligence service as code breakers, interpreters and interrogators. They were credited by General MacArthur as shortening the war in the Pacific by two years.

In their two-year service in the military, they received 21 medals of honor, 33 Distinguished Service crosses, 587 Silver Stars and over 1,100 bronze stars, and an unprecedented 7 presidential unit citations. But their honor was purchased at a terrible price.

Following World Wars I and II, Okamoto said his community was still not seen as an ally.

“Prejudice in any group of people, is not too easily erased,” he said. “It was still a lot of residual anger and pain from the war and many still regard Japanese-American as enemies.”

He talked about the anti-war demonstrations on campus while he was an ROTC cadet at UCLA in 1967.

“While the hippies espoused free love and world peace via psychedelic drugs, on the other side of the world and Vietnam, young members fought and died,” Okamoto said.

When he first deployed during the Vietnam War, Okamoto said he had a rude awakening.

“There in the killing fields of southeast Asia, all the naïve, romantic concepts I had as an ROTC cadet, were quickly dispelled by the ugly realities of war, he said. “Vietnam was a different world, a special universe with its own rules, heroes and villains. There’s no glory or glamour in the fighting in the jungle of Vietnam. It was a lethal and unforgivable act.”

Okamoto said soldiers were not initially welcomed back home to America with open arms after the Vietnam War but soldiers are privileged to serve in today’s military where they are appreciated and well-equipped.

“You are members of the most intelligent, best-trained, technologically proficient, advanced Army the world has ever seen,” Okamoto said.

“In our society, some people are lionized for their great quality, political power, their social position, some are renowned for their athletic ability, some have celebrity status, film stars, rock icons, but of all the titles in the world, I think the proudest is a ‘Soldier’ because it refers to men and women who are willing to give up everything for America,” he said.

He also had a message for the newer soldiers.

“To the younger people today, I know the path you’ve chosen can be difficult for you and your families, you’ll be asked to go to places fraught with danger and stand your post in remote corners of the world, protecting us from those who would do us harm,” he said. “You are the guardians of our nation and protectors of our way of life, so go forth with acknowledgement you have the gratitude and respect of your fellow Americans.”

“Your example bequeaths to this nation ideals that unite all of us as Americans. What you’re willing to do speaks to the values that sustains us during times of trials and crisis. What you accomplish speaks to the dreams that inspire ordinary people to perform extraordinary acts of courage and self-sacrifice; it speaks to the value of loyalty, courage and fundamental fairness, as a testament to the glory of the human spirit. These are the things passed down to us. This is our inheritance.”

The NTC EO/EEO offices, along with the 2916th sponsored the Asian/Pacific Islander event, with the theme, “Unite our mission by engaging each other.” The NTC/Fort Irwin Island Dance Group consists of active duty soldiers, veterans, military dependents and civilians and the group performed several, traditional dances, along with the Te Aho Nui group which demonstrated the Tahitian culture through Polynesian and traditional dances.

An Asian or Pacific Islander is a person having origins in any of the original peoples of the Far East, Southeast Asia, the Indian subcontinent, or the Pacific islands and incudes China, India, Japan, Korea, the Philippine Island and Samoa. More than 56 ethnic groups, speaking more than 100 languages from Asia and the Pacific Islands live in the U.S.