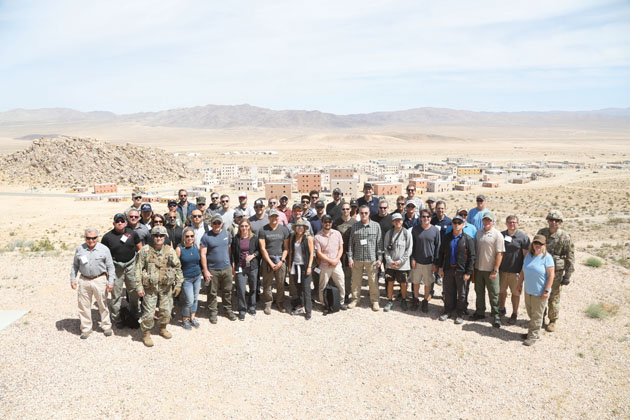 FORT IRWIN, Calif — The VIP/Distinguished Visitor Box Tour welcomed guests over the weekend of May 3 -4, including leaders and executives from the MGM hotel casino in Las Vegas, HBO, Warner Bros., Sony, NASCAR, Echo Lake Entertainment, Smoke on Water BBQ Foundation, 22 Warriors Foundation, and the Academy of Country Music, as well as actor Esai Morales (from the movie, La Bamba).

The Box Tour brings in about three dozen VIP guests with three, main goals: Connecting soldiers with companies/businesses/executives/leaders who can assist them (and their spouses) with jobs and transitioning into the civilian workforce; Introducing Hollywood and others into the rigorous, real-life training and lifestyle of a soldier and their families; and to help ensure soldiers and their families are properly portrayed on the big and little screen now that they have better knowledge of what they do.

VIP guests were also able to ask questions of the military officials and military spouses.

The Box is a training area at Fort Irwin that covers 1,200 square miles (the size of Rhode Island) and replicates two dozen urban towns with demonstrations to assist soldiers and leaders with preparing for combat.

Movie in the Park