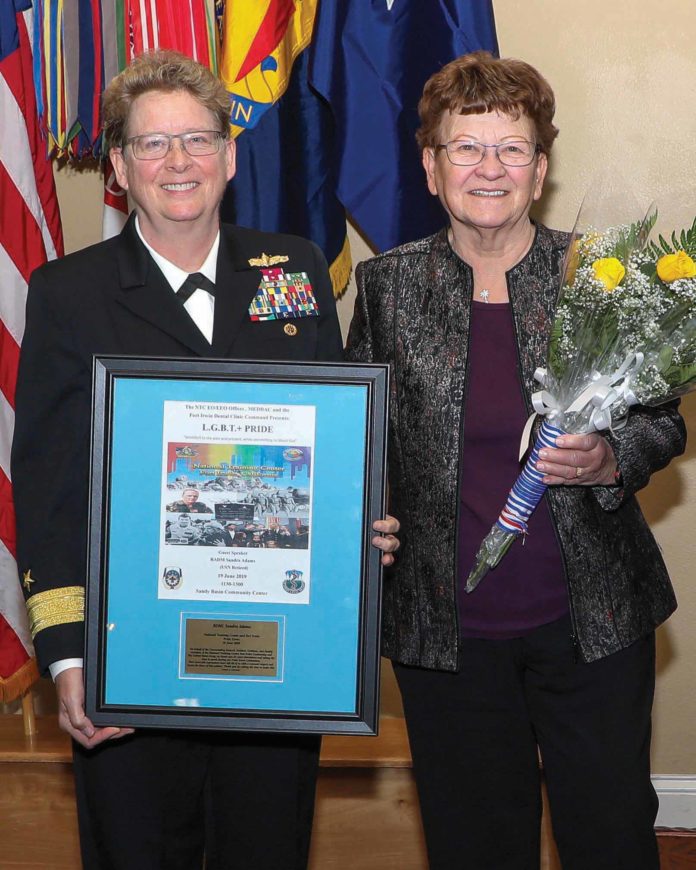 FORT IRWIN, Calif. — The EO/EEO offices, along with leadership at Weed Army Community Hospital (WACH) and DENTAC combined to put on the LGBT Pride Month event at the Sandy Basin Community Center on June 19. Pride Month celebration is an event celebrating lesbian, gay, bisexual, transgender and queer’s social and self-acceptance, achievements, legal rights and pride. Events across the county also serve as demonstrations for legal rights, such as same-sex marriage. This year’s Army theme was “shhhOUT to the past and present, while committing to “Shout Out.”

Rear Adm. (Ret) Sandra Adams was the guest speaker and talked about the joy she felt in being able to finally reveal her truth about who she was in 2013 when she could legally marry her wife. Adams said she had hidden her partner since the 1980’s, avoiding military functions with her girlfriend. She said it was a proud moment when she could acknowledge her spouse and be an admiral at the same time.

Adams retired in 2015 from a 34-year active and reserve Navy career and is a graduate of Michigan State University and the Naval War College. She served as the Commanding Officer of five units, including the USS Bolster (ARS 38) reserve unit, Mobile Inshore Undersea Warfare Unit 203, and reserve headquarters for Naval Forces Japan, and U.S. Pacific Command.

The LGBT Pride Month celebration filled the seats at Sandy Basin, reminding us all how each monthly observance carries a significant importance the National Training Center.

Soldier, NCO of the Quarter selected after competition