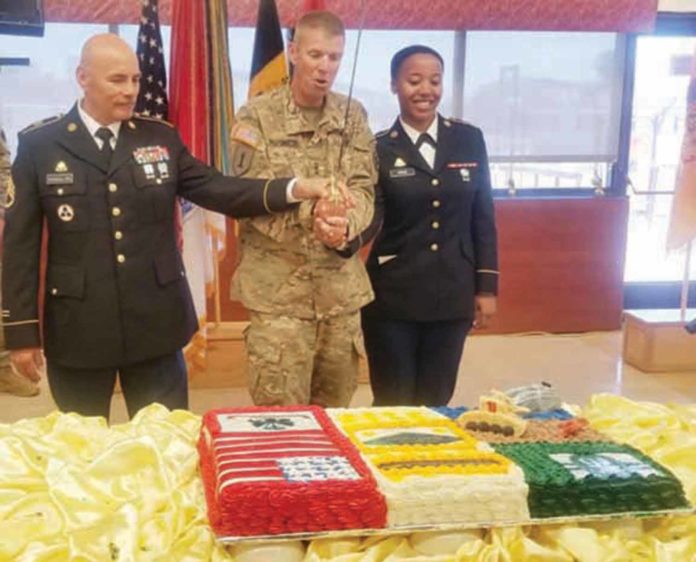 FORT IRWIN, Calif. — Dozens turned out at DFAC #1, and across military posts, to celebrate the birthday of our United States Army on June 14. It was on this date in 1775, that the Second Continental Congress established an Army to fight in the American Revolution, which makes the U.S. Army more than a year older than the nation it serves.

18-year-old Pvt. Andrea King and 55-year-old Staff Sgt. Miguel Gordaliza represented the youngest and oldest soldiers at NTC/Fort Irwin, as they assisted Commanding Major General Jeffery Broadwater with a cake cutting for the Army’s 244th birthday during a celebration in DFAC #1.

D-Day was also 75 years ago, and as military communities marked the 244th year of the United States Army, they also recognized and celebrated America’s victory on D-Day. That was the impetus for the theme for this year’s Army Birthday observance, “America’s Army: Honoring the Call to Service from D-Day to Today.”

From the earliest days of the Revolution and the War of 1812, up to the present day, the Army has fought long and hard for the freedoms all Americans hold dear.

The Army is the world’s most lethal ground combat force in history, with more than 180,000 soldiers serving worldwide right now. Soldiers stand ready to deploy, fight and win the nation’s wars. The Army continues to evolve and change to defeat the enemy, while preserving freedom for all Americans.

The Army has not only defended everyone’s way of life in foreign lands, but has stood guard at home, and combatted devastation from natural disasters, rushing to the aid of Americans in need and keeping everyone safe and secure at home.

Soldiers and civilians are the Army’s most valuable commodity. The men and women are from every walk of life, from every religious and ethnic background, and are the best America has to offer.

In June, the Army remembered its heroes, past and present, who helped transform the Army from its humble beginnings in 1775, to the mighty global force it now is.

They are the guardians of everyone’s freedom and beacons of hope and liberty; and while soldiers never asked to be called anything other than “soldier” or “civilian,” to us, they are all heroes.