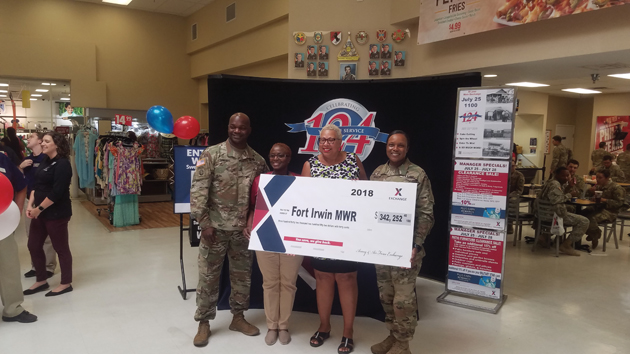 FORT IRWIN, Calif. — The Garrison Commander, Col. Jeanette Martin, and Command Sgt. Maj. Robert Edwards attended the Main Exchange’s 124th anniversary cake cutting and celebration event on July 25. When the community visits the Post Exchange store (PX) and makes a purchase, a portion of that money is put back in the Fort Irwin community. The store manager, Lorraine Davis, along with the Director of Military Welfare & Recreation (MWR), Marion Taylor, handed a check to the Garrison to the sum of $342,252. There was also a spin the wheel for prizes and coupons, giveaways, and trivia. Martin and Edwards thanked everybody who showed up and also thanked Davis for all the hard work her Exchange team put in to making this such an enormous donation.