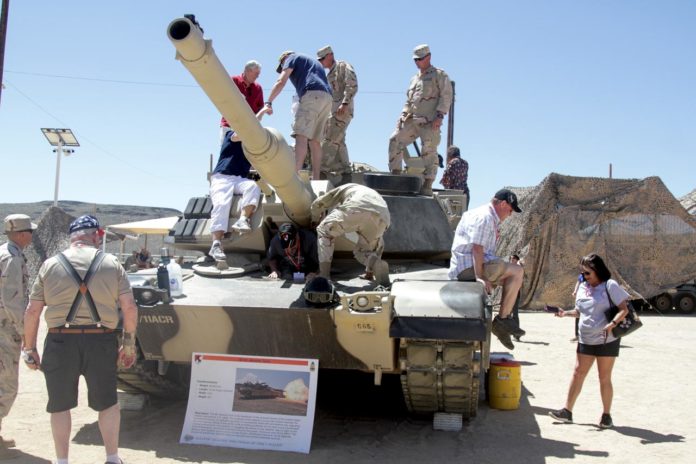 FORT IRWIN, Calif. — On June 7, the 11th ACR had the distinct honor of hosting the Blackhorse Association as part of their annual reunion. The association had more than 90 members in attendance, spanning from the Regiment’s time in Vietnam (67-73), defending the Fulda Gap in Germany (73-94), deployment in support of Iraqi Freedom (05) and OPFOR operations at Fort Irwin. This important event provided the opportunity for current and former Blackhorse Troopers to share experiences and stories from different eras of the Regiment and build the comradery and history of the Regiment.

“The Blackhorse Reunion is the opportunity to reconnect with people I’ve served with, share experiences with Troopers from different eras, and to learn what the Regiment has meant to people,” said Clint Ankor, retired Colonel and former Commander, 3rd Squadron, 11th Armored Cavalry Regiment Commander 1988-1990. “It is also an opportunity in this case to visit the Regiment.”

The Regiment was able to provide a Cavalry skills demonstration, a static display of the Regiments OPFOR Surrogate Fleet (OSV), along with current combat vehicles, a maneuver demonstration, a world-class meal at the Regiment’s dinning facility, a rededication of Wickham Park and the unveiling of a new unit sign honoring Third Squadron.  The event provided an opportunity for the Regiment to honor those members who helped build the legend of Blackhorse, and show our predecessors that their contributions to the unit are not forgotten.

“Overall I think it was a great event and I learned a lot about Blackhorse history from the veterans in the Blackhorse Association, and how storied this organization really is,” Haynes said. “The turnout of the event was phenomenal, and I was actually amazed at how many Blackhorse Troopers came from all corners of the United States.”

“It is important to feel a part of something”, stated Col. (ret.) Ankor. “Being at the reunion and at the Regiment reminded us all that we are all a part of the Blackhorse Family.”