FORT IRWIN, Calif. — Fort Irwin got more than a few, big bangs and fireworks on the Fourth of July this year, as a pair of earthquakes rattled the community and left some people feeling on edge.

A 6.4-magnitude earthquake occurred at 11:33 a.m. along a series of small faults unrelated to the San Andreas Fault, which stretches 750-miles across the state of California. The quake, now referred to as a precursor or foreshock, happened about 115 miles (less than 2 hours) away from the National Training Center (NTC), near Ridgecrest, California. That one was followed by a 5.4-magnitude quake at 5:07 a.m. on July 5, a 5.0-magnitude near Searles Valley at 9:16 p.m. on July 5 and the big 7.1-magnitude quake that hit three minutes later­— the strongest to hit the state in two decades.

More than 100 people in the NTC community quickly took to Facebook, commenting about the earthquake on July 4, saying they felt it.

Elliott Bermudez-Colon was in his car when it happened. “Funny thing, I was parked at the commissary and my SUV starts shaking, I thought Holly Jesus!” he said.

Jose Alfredo Trevizo said it, “Felt like the whole house was moving back and forth,” and Michelle Maleny Vela said, “It knocked off my ladder from the garage and my kids cups!”

Caitlyn Carroll was inside a building and said “Yup, shook the whole building.” 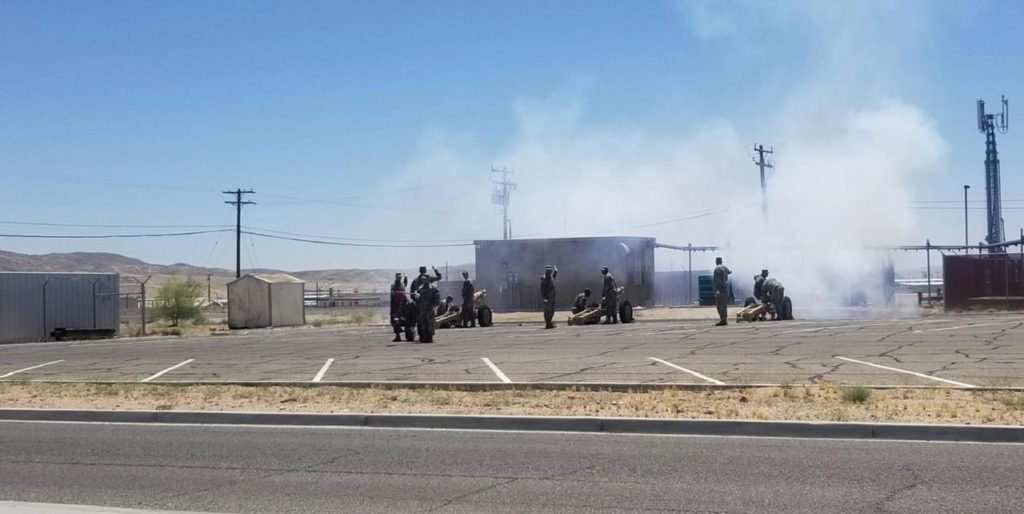 For some, the series of earthquakes brought back frightening moments.

“I have to say that was the first earthquake since 1989 that was long enough to really enjoy without major injury or damage,” NTC Chaplain, (Lt. Col.) Ric Brown said. “I have been in tornado country and hurricane areas and still rather an earthquake over any of those.”

Thirty-six million people felt the pair of larger earthquakes, everywhere from Mexico and Los Angeles, to Las Vegas and Phoenix, according to the U.S. Geological Survey.

Although there were two, main, powerful quakes that rocked the Mojave Desert, there were thousands of others that were too weak to be felt and continued to hit the area every few minutes.

The USGS says about 30,000 people actually felt the severe shaking and there are only about 15 quakes worldwide of a 7.0 intensity or higher each year, which is classified as a major earthquake.

Although there were a cluster of earthquakes over the Fourth of July holiday, the USGS still says this number of quakes is normal.

“We’re having quakes exactly where, geographically speaking, we’d expect these quakes to happen,” Rafael Abreu, a geophysicist with the USGS National Earthquake Information Center, said. “And we’re having the amount of earthquakes we’d expect to see.”

Most Californians do not have earthquake insurance. There were no fatalities or serious injuries reported that were directly related to the quake but the Ridgecrest temblor caused some power failures throughout southern California and swayed the stands in Dodger Stadium, which was about 125 miles away from the epicenter.

The also produced scattered fires, cracked foundations, broken bottles in stores, and other property damage. There are new cracks and surface ruptures in buildings, roads and along the ground that cover 30 miles. The crack, which stretches through the Mojave Desert and across a highway, has become somewhat of a local attraction, The San Francisco Chronicle reported. The rupture was initially about two inches wide and eventually becomes deep enough for brave spectators to reach their limbs inside and the fissure can be seen from space.

The Fort Irwin Commissary sustained minimal damage from the earthquakes, with less than $500 worth of groceries falling off of shelves.

The store manager helped facilitate the restoration of operations at China Lake.

Dozens in the community posted photos of what they thought to be quake damage—cracks that ran across their entire ceilings or vertically down their walls, as well as cracks in doorways, garages and outside grounds.

The Community Director for the Villages said they had a few work orders called in for cracked drywall but nothing structural, only some cosmetic issues.

“If we get any calls regarding drywall cracks, we will inspect it for further damage, if there is further damage, repair it,” Adam Hay said. If there is no further damage, in most cases Housing will leave the cracks because they are considered cosmetic, and they will fill and paint those once the resident moves out.

“Drywall cracks are pretty common for us,” Hay said. “Usually caused from natural settling and the sonic booms we get from the action out in the Box.”

California’s governor, Gavin Newsom, declared a state of emergency in the state and estimated damage to cost $100 million, which could have been higher if the epicenter was in a more densely-populated area.

Many residents began to talk about earthquake preparedness plans and kits. Advice on what to do and how to prepare can be found on ready.org and earthquakecountry.org.