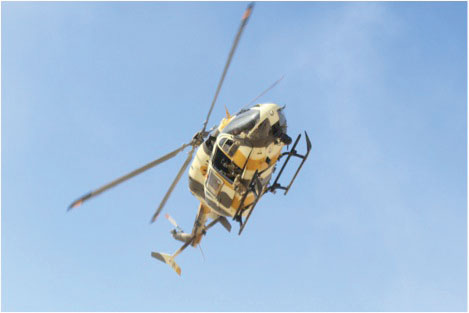 FORT IRWIN, Calif. — The 11th Armored Cavalry Regiment has a rich and proud history that dates back to 1901. And within the Regiment, there is one Trooper that has deep, family roots with the Regiment tracing back nearly 80 years. Sgt. Austin Leo, a Combat Engineer from Engineer Reconnaissance Team Platoon, 58th Combat Engineer Company, 11th ACR, is a fourth generation 11th ACR trooper with ancestors having served in the Regiment as far back as World War II.  This was a legacy of service in the Blackhorse Regiment that Sergeant Leo was proud to continue. “I requested 11th Cav because of the heritage I have with my family; but also to get the chance to get the OPFOR experience.”

Leo’s family tradition of service in the Blackhorse Regiment with his great-grandfather, Pvt. Oscar Leap. Leap served as a Trooper in the 11th Cavalry Group (Mechanized) during World War II. While Leap was a part of the 11th Cavalry Group, they were stationed in the European Theater.  Arriving on Oct. 10, 1944, Leap went to the front line in Germany, where he and his unit were assigned to protect the Roer River sector. Over the course of the conflict, the Group saw action during the Battle of Munster, the seizure of the Ricklingen Bridge over the Leine River, and the Battle of the Bulge. Although he did not realize it at the time, Leap had begun a family legacy of service in the Blackhorse Regiment.

Sgt. Leo’s father, Staff Sgt. (ret.) Michael Leo, joined the Army as a Cavalry Scout and was immediately assigned to the 11th ACR.  Stationed in Germany, the Regiment was assigned to keep Soviet expansion at bay.  Staff Sgt. Leo served as part of the Border Missions at Fulda Gap with Fox Troop, 2nd Squadron.  During this time, Staff Sgt. Leo would deploy as part of Operation Desert Storm, becoming the third member of his family to deploy as part of the Blackhorse Regiment. After his deployment to the Persian Gulf, Staff Sgt. Leo returned to Germany and finished the border mission at the Fulda Gap. After completing his first assignment with 11th ACR, he was then assigned to the 3rd Cavalry Regiment.  But before long, he would return to the 11th ACR as part of Headquarters and Headquarters Troop, 1st Squadron, in order to support the OPFOR mission at the National Training Center.

Sgt. Leo and his family will forever be rooted in Blackhorse history, not only because of their continued legacy of service to the Regiment, but also through of their sacrifice and dedication to their country.  When talking about the pivotal role the modern Regiment plays in today’s Army, Sgt. Leo said, “11th ACR has a very important role because we’re training these units to go fight and get to see operations like Iraq and Afghanistan or Syria now; basically to fight against ISIS, the Taliban, and other insurgencies.”  He also spoke about the historical importance of 11th ACR when his father, grandfather, and great grandfather served. “Back then 11th ACR was very crucial as well during the Cold War against the Soviets and the Warsaw Pact because from what my dad was telling me when 11th ACR was in the Cold War they were constantly doing drills at the border, facing down the Russians and East Germans and my dad was in a (M2) Bradley and they would see Soviet BMPs (Boyevaya Mashina Pekhoty meaning “infantry fighting vehicle”) or T80s and T72s and they’d just be facing each other just in case anything popped off then that’s where the conflict would start, right at the border. So 11th ACR is a very crucial unit to the Army, it really is. It still is today and it was back then as well.”

Overall, Sgt. Leo and his family have a highly impressive lineage with the 11th ACR. Although this is undeniably a lot to live up to, Sgt. Leo has already distinguished himself with a few deployments under his belt as well as having served in the 3rd Cavalry Regiment, another unit in which his father previously served.  He has already made his family and his fellow Blackhorse Troopers proud. The service of Sgt. Leo and his family is a testament to the 11th Armored Cavalry Regiment being the BEST damn regiment in the Army. ALLONS!

Listening to the community