Sgt. Benito BeasGarcia of the Horse Detachment, Regimental Headquarters and Headquarters Troop, Regimental Support Squadron, 11th Armored Cavalry Regiment, wears a yellow ribbon in tribute of his late mother. His mother is fondly remembered as a mentor that could make someone laugh and teach right from wrong. BeasGarcia grew up in Northern California with orchards and dairy cow farms with limited experience with horses.

At the time of his mother’s sudden passing, BeasGarcia was scheduled to participate in a training rotation with his prior unit at the National Training Center/Fort Irwin, Calif. He was placed on emergency leave at his home unit of Fort Riley, Kansas, and on his return had to travel to Fort Irwin to join his unit for training. He was faced with a tiring traveling schedule in this trying period. During his time in service, BeasGarcia made the decision to commemorate his mother by wearing a yellow ribbon under his duty uniforms. He mentioned that he also carries a white rosary that was bathed in holy water at her funeral during events. 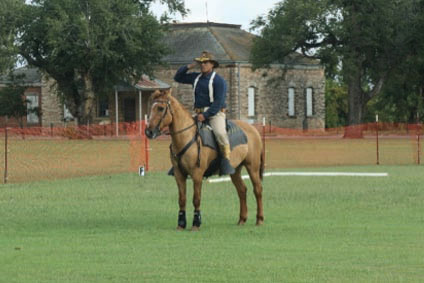 The first time BeasGarcia wore the ribbon was when he was out for a Live Fire Exercise as a tanker while stationed at Fort Riley, Kansas. During that time, he wore it under his firing uniform full time as a gunner in his tank platoon. After, he was reassigned to Fort Irwin where he was with the 1st Squadron, 11th ACR, before he volunteered for the Horse Detachment. BeasGarcia now wears the ribbon mainly during events and competitions. He expressed that he felt more secure when wearing the ribbon during cavalry events. “It’s my way of having that guardian angel right next to me the whole way,” he says. He feels that she’s with him every time he rides. He added that he feels better when wearing it during events, but he doesn’t wear it all the time. “Working with the horses I like to give her a break every now and then” he jokes. He believes that his mother would have loved visiting the Horse Detachment and knowing that he wears a yellow ribbon in her honor.

This past September, BeasGarcia wore his yellow ribbon during the 2019 National Cavalry Competition held at Fort Reno in El Reno, Oklahoma, where he placed 1st in Military Horsemanship, 2nd in Combat Horsemanship, 3rd in Sabers, and finished as the Best Overall Level 1 Rider. BeasGarcia wishes that he could tell his mother, “I’m the number one champion.” Furthermore, he wants her to meet the horse he rode to victory, a mustang named Comanche. BeasGarcia hopes to pass the ribbon down as a family tradition. “I definitely would like to keep it in the family… I’ll wear it whenever I do anything that challenges me,” he states about keeping the ribbon in his family’s future. He keeps more mementos, like scarves and jewelry, to remember his mother both in his house on post and the family home in Northern California.