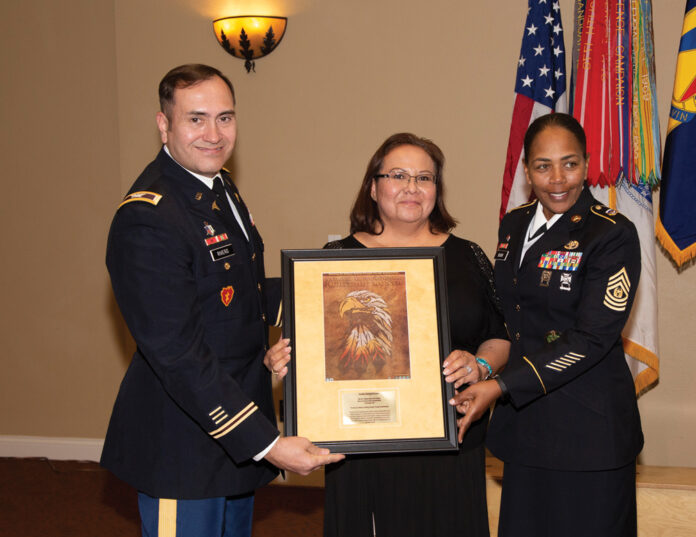 Native American Heritage Month was formally established by President George H.W. Bush in 1990 and has been observed annually. This year’s event was hosted by the Fort Irwin Medical Department Activity (MEDDAC) and Equal Opportunity Office. The theme was “Sovereignty, Trust and Resilience,” and festivities included a reading of a traditional Lakota prayer by Sgt. Marcus Marshall, a video that highlighted military service, and displays of local archeological native artifacts. The speaker was Weed Army Community Hospital’s Geraldine Pacheco, who is of American Indian heritage and whose Native American name is “Blackgoat.”

Pacheco, a native Navajo, was born on the Navajo reservation in Fort Defiance, Arizona. She is from the Black-sheep clan and born into a large family.

“It was my father’s wish that one of his children join the military,” she said. “He would hint to me that he wanted me to join. I was the youngest— none of my siblings joined so I enlisted for my father.”

Upon graduating high school, Pacheco enlisted into the military at just 17 years old as a combat medic. She was stationed at Fort Irwin and never left. Pacheco currently works as an licensed vocational nurse in primary care on post at WACH.

“It happened to us, too (when recounting on the events of September 11th),” Pacheco said. “We are part of it. If its war, then we’ll be the first ones to be part of it. This is our land and we (Native Americans) will always defend it. This is why I am proud that my son is following in my footsteps and has decided to join the Army as well.”

Upon making this announcement, the crowd erupted in applause.

This year’s observance highlighted the many contributions made by Native Americans to the U.S. Army and other military branches. Per capita, Native Americans serve in the military at the highest rate of any other ethnicity.