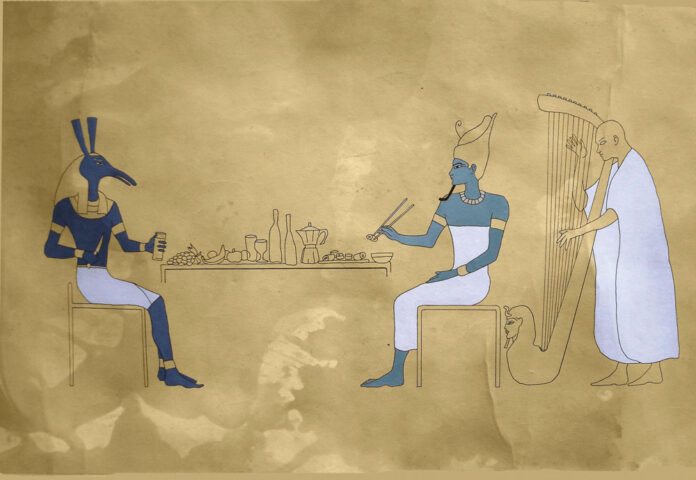 FORT IRWIN, Calif. — For this article on ancient civilizations, we are going to be talking about Egypt and its many gods and goddesses. It is pretty cool to see how they taught their theories, and they played out with the mysterious things that happened around their farms, sky, and sun, etc. Osiris is an Egyptian God of the underworld. He is the brother and husband to the Egyptian goddess Isis. He is the first child of the god of Earth and the god of the Sky. After the world was created, he was killed by his brother Set and was later brought back to life by his wife and sister Isis.

Osiris is usually shown as a mummy or partially mummified to represent a role as Judge of the Dead. People still worship Osiris as a religious belief. Set, also known as Suetekh, was the Egyptian god of war and chaos. He was the brother of Osiris, Isis, and Horus, the elder. He was also Horus, the younger’s uncle, and Nephthys’ husband. His companion was the goddess Tawaret; the hippo-headed goddess who presided over fertility and childbirth. He was one of the five gods that were made, due to the union of Geb and Nut. His name is usually translated as “instigator of confusion” and “destroyer,” and he was associated with the disorder, foreign lands, people, and the color red. He is sometimes depicted as a red-haired beast with a forked tail and cloven hooves or a shaggy red dog-like animal.

As time went on, Osiris and Isis became king and queen, and Set began to resent Osiris and his power. Set’s anger grew worse after his wife, Nephthys, disguised herself as Isis and tricked the king, which caused her to become pregnant. Set came up with a plan to have a coffin made for Osiris to fit his exact measurements. Then, Set threw a giant party and invited Osiris. He said he had a surprise for the guest; whoever could fit in the coffin perfectly could take it home. No one could fit it until Osiris’ turn came up. Once Osiris got in the coffin, Set slammed the coffin door and threw Osiris in the Nile River, ultimately drowning him. Set then became king, but then he set out to find Isis and baby Horus. Isis hid her son from him for a long time until Horus was grown. Once he grew, he killed Set.

Ra or Re was a sun god in ancient Egypt. He was considered to be the king of gods. He was also considered the most important god of them all. The ancient Egyptians believed that Ra was swallowed every night by the sky goddess Nut, and was reborn every morning. He had the head of a ram. He traveled through the underworld at night. Present in ancient Egyptian mythology is the Eye of Ra, shown as the sun disk with two ‘uraeus’ cobras twisted around it, next to the white and red crowns of Upper and Lower Egypt. Horus, the Eye of Ra, shifted positions in the myths, becoming both an addition of Ra’s power and a separate unit altogether. Ra is from the second dynasty. The sun god is important because he grows crops for light and warmth. He was a vitally important god.

Army at work on high-tech gear, new rifle, to give Soldiers winning edge in close combat

Army at work on high-tech gear, new rifle, to give Soldiers...

Despite COVID-19, combat training centers keep Soldiers in the fight