FORT IRWIN, Calif.  — The dust settled around the National Training Center as Training Rotation 20-02 comes to a close on Nov. 12. Troopers from the 11th Armored Cavalry Regiment, 3rd Cavalry Regiment, and 2nd Cavalry Regiment gathered for the 11th Lucky 16 event at Fort Irwin, Calif. The Lucky 16 is an event where Troopers from the 2nd CR, 3rd CR, and 11th ACR gather to commemorate the history of U.S. Army Cavalry and demonstrate our defining factor that distinguishes Cavalry as an elite combat force of the US Army. The first gathering was more of a Lucky 13 with Troopers of 2nd CR and 11th ACR present, and took place in 1979. The first Lucky 16 occurred three years later and has been practiced, from then on, when Troopers are available to gather. It is a time for Troopers from fellow Regiments to gather and share their experiences’ and continue to build comradery within the Cavalry branch.

The evening began with the Cavalry Charge bugle call echoing across the tent, then proceeded with the presentation of the Colors, and an invocation by 11th ACR Chaplain, Lt. Col. James Key. The Master of Ceremonies then welcomed Col. Ralph Overland, 78th Colonel of the 3rd Cavalry Regiment to the podium to make welcoming remarks. Upon completion Col. Scott Woodward, 68th Colonel of the 11th Armored Cavalry Regiment, took the podium and stated, “It’s more than a branch. It’s an attitude, a way of life, grounded in exemplary service to this great nation.”

Woodward continued, discussing the long linage the Cavalry has and the pivotal role it has played in every conflict since the regiment of light dragoons was authorized by Congress on Dec. 12, 1776. The 2nd, 3rd, and 11th Cavalry Regiments have served together in the Philippines, World War II, the Cold War, and the Persian Gulf, having been awarded 42 Medals of Honor and remain the only three Cavalry Regiments remaining on Active Duty. Once Woodward completed his welcoming remarks, command teams from the Regiments proceeded with the toast of the evening, to include; toast to each Regiment, the United States Army, the Troopers of the Lucky 16, and to the fallen Troopers.

The evening continued with the playing of the Regiments songs from the units and a recognition of Troopers that have served in more than one of the Regiments. To mark the significance of the event, Regimental Command teams or representatives participated in the traditional signing of the 2019 Lucky 16 Charter, witnessed by Col. Carl Michaud, Chief of Staff of NTC/Fort Irwin, documenting the evening and exchanged gifts. The 11th ACR presented a photo collage including a Stetson, a Campaign cover, spurs, a sabre and horseshoe, and the sand from the training area that united us one the day. 3rd CR presented a wooden display with a set of spurs and a canvas print of the individual unit’s crest. After the presentation of gifts, the event continued with the retiring of the Colors and the remainder of the social time. This event marks only the 11th time that the Regiments have been able to join in celebration of their history and branch. Troopers who were able to attend will remember the event for years to come and possibly be able to attend another Lucky 16 within their Army career. 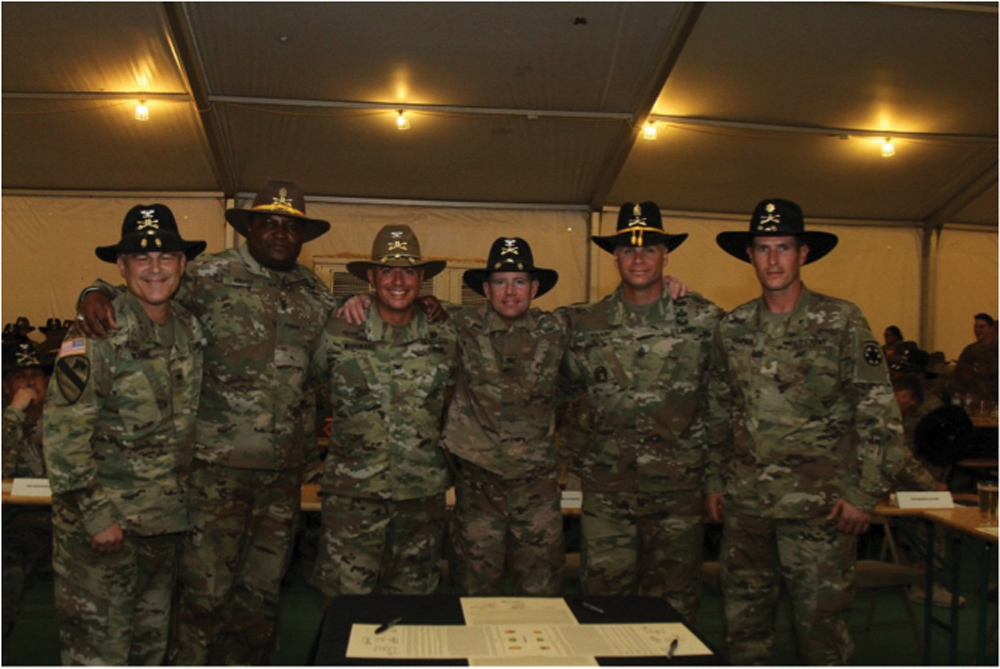