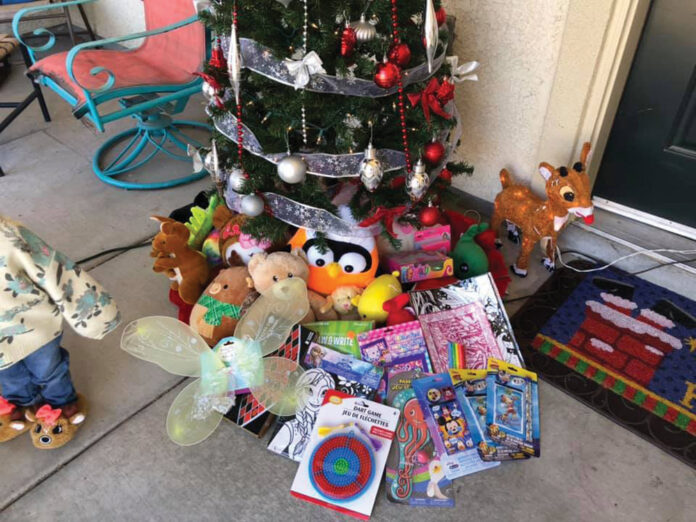 FORT IRWIN, Calif. — A Fort Irwin family wanted to pay it forward to local residents and decided to bring some cheer to the community.

Carine Arizza Mazon and her family provided free Christmas gifts to anyone in the community who wanted to take them up on the offer.

“It’s always a good feeling to share our blessings especially if we have extra,” Mazon said.

On Dec. 11, she posted on the Fort Irwin Connection Facebook page, saying, “Santa & his elves are at 9067B Chinook Lane…because it’s the season of giving.”

She offered up items like stuffed animals and toys to kids who she said may need an extra gift for the holidays.

Mazon requested that families only take one toy per child. The toys were gone that same day but then she put out the same offer for the following week. Her post received more than 70 ‘likes’ and several comments.

They left the tree outside on their porch, with unwrapped presents underneath for everyone to choose from at any time of day or night.

Lygia Maria Costa-Moreira Patterson commented on the post saying, “That is such a sweet thing you’re doing!”

Mazon says that her family always gave back when she was growing up as a child. She lived in the Philippines, seeing many people living on the street. She said every year, her family provided items like canned goods to help put a smile on their faces and she wanted to continue that as an adult.

“I wasn’t able to do it 2 years ago due to being a stay home mom with no extra so I started working this year and decided to give back with the military family,” she said. “We all know military doesn’t pay much for some families.”

Mazon said she just wants to share a piece of her heart with others.

“I want people to know that there’s still good and kind people out there,” she said. “We’re just sharing our blessing.”