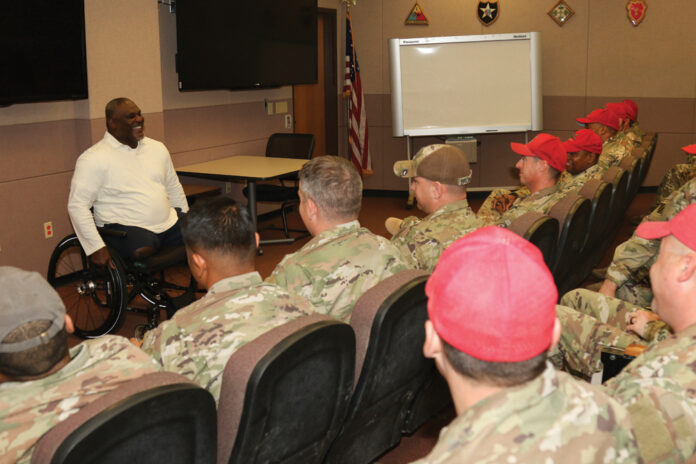 FORT IRWIN, Calif. — Col. Greg Gadson (ret.) spoke to the Fort Irwin community about his service, his life and lessons learned, while providing advice to soldiers on Dec. 5.

“How are we taking care of each other and are we extending dignity and respect?” he said. “We’re not competing against each other, we’re competing with each other. We need to capitalize on finding a way to be a team.”

Gadson served for 25 years, is a double amputee and star of the 2012 movie, Battleship.

He spoke to artillery Soldiers in a private setting, before addressing the community at the Samuel Adams Brewhouse ballroom.

“I trained here (at the NTC) in 1990 before Saddam invaded Kuwait; and again in 2006, we didn’t finish our rotation before we (Gadson’s unit) got pulled out,” Gadson said. His December visit was his third one to the National Training Center.

Gadson has served in every major conflict of the past two decades, including Operation Desert Storm, Operation Joint Forge, Operation Enduring Freedom, and Operation Iraqi Freedom. He was injured in an improvised explosive device (IED) attack in Iraq in 2007, leading to a bilateral above-the-knee amputation.

“I’m here today because my team saved my life,” Gadson said. “People matter— take care of your people and everything else will fall into place.”

Gadson said that following his injury, he nearly died six times and needed 129 units of blood to survive. He attributes his survival to Private 1st Class Eric Brown for his survival. Brown was Gadson’s combat medic and “personal hero,” who applied tourniquets to Gadson’s legs and helped save his life. Brown had just two weeks of medic training before deploying. Gadson later decided to keep Brown as his personal medic, saying, “If he’s good enough for my unit, he’s good enough for me.”

With Gadson’s determination and will, along with support and Brown’s efforts, Gadson was able to overcome his physical disabilities and went on to serve for eight more years on active duty. Gadson concluded his service as the garrison commander of Fort Belvoir, Virginia.

Gadson believes that giving back to the military is his way of continuing to serve.

“Even as a veteran, we have a responsibility to inspire the next generation and communicate our service to our community,” Gadson said. “It’s an honor and privilege to engage with those who are serving. I share my experiences, hoping it helps them (the soldiers) to unlock something inside of themselves that they need.”