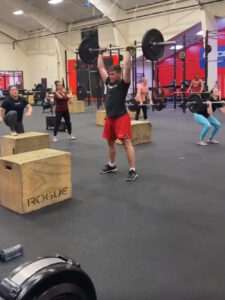 FORT IRWIN, Calif. — As players and fans continue to mourn the loss of one of basketball’s biggest players, Fort Irwin’s MWR Sports, Fitness and Aquatics department participated in a special tribute to Kobe Bryant.

“It is a tradition in functional fitness to do ‘Hero or Tribute’ WODs (workout of the day) to honor a fallen Soldier, police officer, firefighter or anyone who made a positive impact in the lives of many,” Heidi Leigh with the Box Fitness Gym said. “We do this to pay respect to their memory and when the workout gets tough, we remind ourselves that we must go on because they cannot.”

Kobe Bryant and his 13-year-old daughter, Gianna, died in a helicopter crash, along with the pilot and six others on a hillside in Calabasas, California,on Jan. 26. The group was headed to Thousand Oaks, California, for Bryant’s Mamba Sports Academy basketball game.

He spent his 20-year career with the Los Angeles Lakers. Fort Irwin is just a two-and-a-half hour drive from the Staples Center, where the Lakers play and mounds of memorials and many mourners have come to pay their respects, and to leave memorials. Many say Bryant’s death was not just a loss for the sports world, saying he was a legend and bigger than just sports.

Participants at the Box functional fitness gym did rounds of eight thrusters and 24 box jumps, in honor of the two numbers Bryant wore for the Lakers.

“These workouts are publicized and done at Boxes across the functional fitness community and sometimes even around the world,” Leigh said.

Bryant leaves behind three daughters and his wife, Vanessa. The cause of the crash is still under investigation.