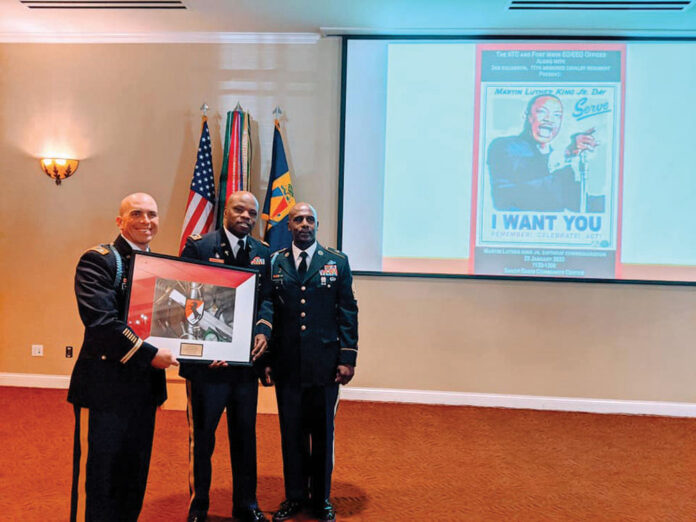 “No matter how many road blocks or obstacles that were placed in Dr. King’s way, he never gave up, he never lost hope, he never quit,” Key said. “Instead, until the last day of his life, he kept moving.”

The theme of his message was “Keep Moving,” just as King did.

Began by talking about his fourth grade teacher who was from the racially-divided, deep south state of Alabama, and always told stories to students about the civil rights movement.

He said that the year of 1968 best exemplifies the essence of Dr. King and his fighting spirit.

“It’s here that we see how he responds to challenge and controversy,” Key said. “It’s here that we see a clearer picture of Dr. King’s ‘Mamba Mentality.’ Dr. King was the MVP of the Civil Rights Movement. When something needed to be said or done, they gave the rock to Dr. King. If there were a few seconds on the clock, ‘here Dr. King, take the shot.’ He was the game changer.”

“Mamba” is in reference to a nickname the late Los Angeles Lakers’ star, Kobe Bryant, gave himself. Key said that King’s most controversial speech was most likely his anti-war message in 1967, entitled “Beyond Vietnam.” There, he criticized Americans’ involvement in the war.

“He thought it was morally imperative to stop the war through nonviolent means,” Key said.

President Johnson felt betrayed, the NAACP questioned his judgement, the New York Times and the Washington Post criticized him and lawmakers said he need to stay in his lane, but Key said King kept moving with his vision.

King went from a 26-year-old, local leader of a boycott, to a 39-year-old, internationally known, seasoned veteran of the movement.

“He’s now a little tired, worn down and yet still on the battlefield, still serving, still trying to make wrong right, still putting in the work, still fighting the good fight— he keeps moving,” Key said.

Key then asked what King would think if he were alive today.

“To be honest, I think he’d be pleased on one level, and disappointed on another,” Key said. “He’d probably ask why is it that only half of the U.S. population exercises the right to vote? Why hasn’t the gap between the rich and the poor closed more aggressively?”

Key went on to the challenge everyone to carry on King’s legacy.

“He’d want young people to know that the privileges that we endure today didn’t happen overnight. Somebody sacrificed, somebody went to jail and someone died so they could live in a more perfect union. He’d tell all of us to refuse to die until we’ve done some good for humanity,” Key said.

Key urged guests to continue to volunteer in places like soup kitchens and veterans homes, even when they’re tired and don’t want to do it.

“Our challenge today is to keep Dr. King’s dream alive today by helping those who can’t help themselves,” he said. “To remember that the King holiday is a day on and not a day off.”

As guests greeted Key after his speech, they told him he was inspiring and that his speech was powerful and his passion was infectious.

The event was hosted by the NTC EO/EEO and the 2/11th Armored Cavalry Regiment.