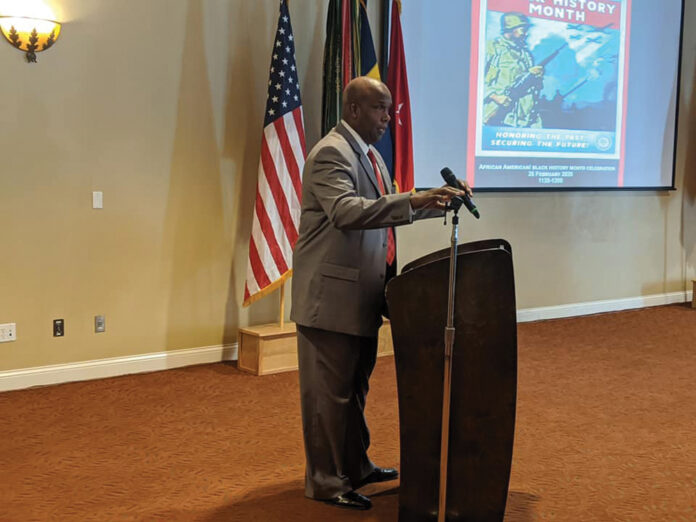 FORT IRWIN, Calif. — Retired Lt. Col. Kevin Bostick got emotional when talking about his service to the nation as a minority, during Fort Irwin’s African American/Black History Month Observance.

He encouraged soldiers and guests to be inclusive, treat everyone with respect and make a difference, striving to leave an organization better than they found it.

The event was held on Feb. 25 at the Sandy Basin Community Center and hosted by the National Training Center/Fort Irwin EO/EEO Offices, along with the Regimental Support Squadron (RSS) of the 11th Armored Cavalry Regiment.

Before Bostick began speaking, a video was played featuring Fort Irwin soldiers talking about what it means to be a black soldier in the Army today, and giving advice to future soldiers.

African Americans now make up about 19 percent of the military and Bostick said although the country is not where it needs to be on race relations, it’s not where it used to be and that’s a good thing.

“I will tell you, even though we’re not there yet, as an African American, I wouldn’t live anywhere else in the world.”

Bostick challenged guests to think about others.

“Are you doing what you need to as an individual to ensure that the people you work with and serve with are being included in what you’re doing and being made to feel a part of what you’re doing?”

He highlighted the contributions of African Americans to the military and to the country, from Mae Jemison, to George Washington Carver.

“What people did back then will influence what we experience today,” Bostick said. “The struggle goes on and the struggle continues and there have been people who have lost their lives because of it.”

He also quoted Frederick Douglass saying, “If there is no struggle, there is no progress and it may even cost you your life.”

Many Sergeant Majors and general officers graduated from Historically Black Colleges and Bostick said those schools are still key to turning out good, military leaders.

“HBCUs paved a way for African-Americans to get an education when they were not allowed to enter a predominately Caucasian school,” he said.

Before closing out, Bostick encouraged guests to remember to exercise their right to vote because, “When you don’t vote, you don’t have a voice.”

As Bostick wrapped up, he inspired soldiers of all races to be the best version of themselves and help others.