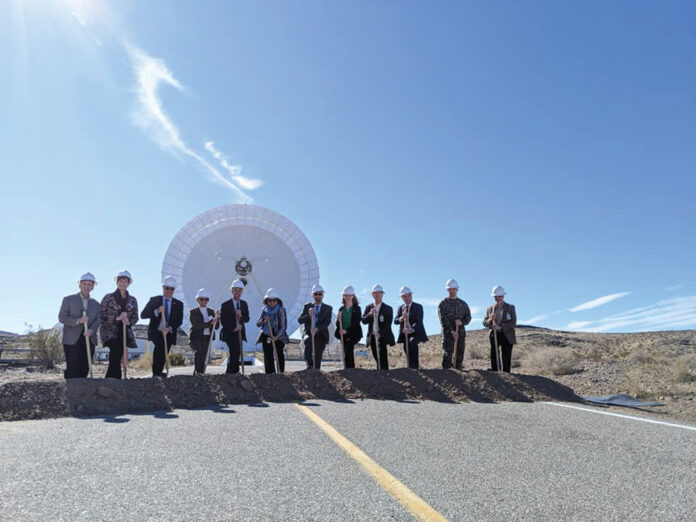 The new antenna dish is called “Deep Space 23” and it will be a part of a network as missions meet new milestones in the 21st century of NASA’s vision for space exploration.

“The future looks great and what makes it look great are the people who make it happen,” Badri Younes, Deputy Associate Administrator for NASA Space Communications and Navigation said.

This local, Goldstone location is one of only three complexes around the world known as the Deep Space Network, including Madrid, Spain and Canberra, Australia. They were established to provide the ability to communicate with spacecraft, not only in orbit around the earth, but also deeper into our solar system The Deep Space Network complexes are placed an equal distance of 120 degrees apart to provide 360-degree coverage of constant communication with spacecraft around the world, as the Earth rotates. The data improves understanding of the solar system and the larger universe.

This is the first groundbreaking for a new antenna in 24 years. This new antenna dish will be the fourth one in full operation at the Fort Irwin/Goldstone Deep Space Network site. It sits on what’s called the “Apollo” site with two other antennas, all measuring 34 meters wide (112 feet wide). The largest antenna sits a few miles away on what’s called the “Mars” site and measures 70 meters wide.

Goldstone was the first site chosen for a Deep Space Station back in 1958 because of its optimal location—a remote area of the Mojave Desert, free from radio signal interference.

To go along with the name of the new dish (Deep Space 23), there were 23, fifth and sixth grade students invited from the Barstow STEM Academy and Fort Irwin Homeschool community to join in on the historic moment. Students led the audience is the pledge of allegiance and even had the chance to ask and answer questions about space, along with taking photos with at the site of the new antenna dish location.

Madisyn Carlson is one of Fort Irwin students who got to attend. She said she enjoyed being able to ask questions and even got to learn who the first woman in space was, but that wasn’t her favorite part.

“It’s a great experience,” she said. “I liked when we did the Pledge of Allegiance.”

NASA’s Deep Space Network. It’s the largest and most sensitive scientific telecommunications system in the world.

The Deep Space Network is operated by NASA’s Jet Propulsion Laboratory (JPL), which also operates many of the agency’s interplanetary robotic space missions.

For more than half a century, the Goldstone arm of the Deep Space Network has provided a vital communications link for NASA/JPL manned and unmanned spacecraft. Fifty years of space exploration has seen many milestones in both robotic and manned spacecraft. From the first planetary encounters, the first human landing on the moon, to missions that reach the farthest points in our solar system, the Goldstone Deep Space Communications Complex has been there to bring home the critical data, images, or science.

Putting astronauts on the Moon and Mars will require advanced technology, such as lasers capable of transmitting vastly increased amounts of data and for spacecraft tracking and the Deep Space Network leads the way in making it a success.