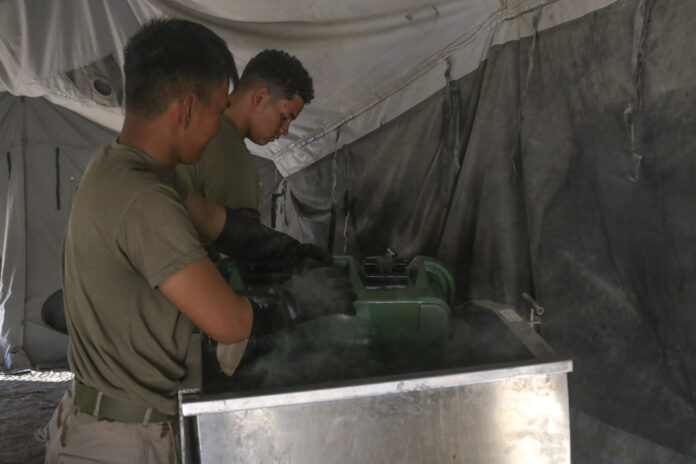 NATIONAL TRAINING CENTER, Calif. — After seven days of grueling action across the hills and valleys of the National Training Center, the Blackhorse Troopers of the 11th Armored Cavalry Regiment are worn down. Not only have they been fighting the Rotational Training Unit, they’ve been fighting Mother Nature herself: with temperatures ranging from 70 degrees, to just above freezing at night, and two days of torrential downpours.

Suddenly a cry goes out from behind the lines: “Chows Here!” The Troopers gather around, already chattering excitedly about what’s for dinner. They find that they are not disappointed.  As the tops are popped off the mermites, they’re greeted by the site of heaping piles of steak and mashed potatoes, to keep them warm and alert for the cold night to follow. This hot meal and every other one eaten during rotation are the result of the hard working Troopers of the Headquarters and Headquarters Troop, Regimental Support Squadron’s Field Feeding Teams (FFTs).

Throughout the course of the rotation the FFTs, led by Staff Sgt. Joseph Lach, manned two, separate Field Feeding Sites in the training area and with 17 Soldiers and NCO’s managed to produce approximately 2,800 meals daily, allowing the Regiment to enjoy two hot meals a day throughout the rotation. They provide an ever-evolving menu, to include biscuits and gravy, Philly cheese steaks, French toast, and of course the universally popular chicken and waffles. With such a great quantity of delicious courses produced time and again, without fail, it’s a direct reflection of the professionalism and dedication of the FFTs.

The hard work begins before the rotation starts as the FFTs maintain and stage their numerous vehicles and pieces of equipment prior to moving into the field. In fact, the FFTs are typically the first element of the 11th ACR in the field during rotation, setting up the night before the main Blackhorse element rolls out in order to meet them with a hot meal when they arrive.  Once in place, they are typically the first soldiers up and the last to bed, with the typical work day stretching from 1a.m. to 10p.m. After an hour of prep time, cooking typically begins at 2:30a.m. and continues virtually without pause until 7p.m. when the last dinner meal is served, followed by several hours of cleaning.

In rotation 20-06, the FFTs had unique challenges. First, they supported an increased headcount from both 11th ACR and the Guest Blackhorse Troopers of the United States Marine Corps 1st Battalion, 2nd Light Armored Regiment. The FFTs conquered the challenge with their typical can-do attitude, even taking the opportunity to cross train with the Marines own culinary specialists. The FFT even brought the food to the fight by manning Logistics Release Points (LRPs) for every meal from Training Day Three onward. At 6 a.m. and again at 5 p.m., every day, the FFT leads small convoys to LRPs closer to the forward line of troops, better supporting the rotational fight. The Troopers of the Field Feeding Team truly fed the force during the last rotation.