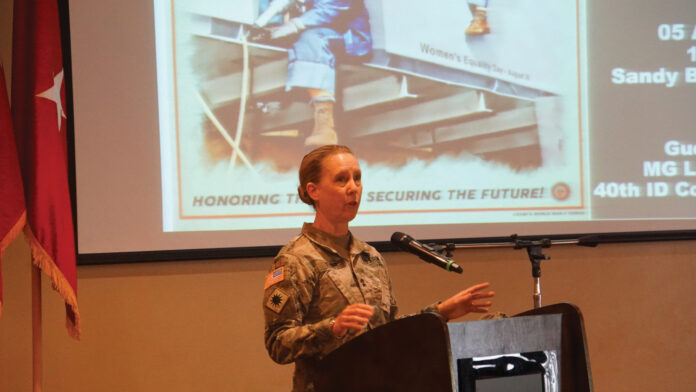 FORT IRWIN, Calif. — Maj. Gen. Laura Yeager helped celebrate Fort Irwin’s Women’s Equality Day on Aug. 5 by speaking about the history that has promoted the advancement of women in the country and in the military.

“Woman have fought for this country ever since the birth of the United States,” Yeager said as she referenced the passing of the 19th amendment which gave women the right to vote.

With more than 30 years of service, Maj. Gen. Yeager is the first-ever woman commander for an infantry division in the U.S. Army and continues to set an example for all women, demonstrating how invaluable they are to the military.

Yeager highlighted Dr. Mary Walker, awarded the Medal of Honor in 1865, still being the only woman to date to earn the Medal out of the 3,473 people who have received the award.

“Today 1 in 12 veterans are women, which is about 8%, up from 4% in 1980,” Yeager said, pointing out the fact the women have become ever more present in the military and there is a trend of growth.

“I am here as one of the female Generals, I’m a living example of the commitment that the Army and the Armed Forces have made to support, mentor and provide opportunity to females in America’s armed forces,” Yeager said, as she continued on to encourage fellow females to strive for greatness in the military and further their careers.

Yeager also pointed out that, “It’s inspiring to see woman continue to ascend through the ranks” and that “there is only one brass ceiling left and that would be the Joint Chiefs of Staff.”

Yeager proceeded to reiterate that she is very confident that it will happen and that the Army will soon see a female sitting on The Joint Chiefs of Staff.

During her speech, she addressed the pay inequality that civilian women still face today, earning only 82 cents on the dollar compared to men. This, she said, is something that is not seen in the military, as the Army’s pay system is transparent and equal.

“The Army is a very simple organization,” Yeager said. “There are tasks, conditions and standards for everything, and as long as you can perform those, you should get the same pay– it’s very fair, it’s very equitable.”

Since joining the Army in 1986, she has earned exactly the same pay as her male counterparts, with the same rank and the same years of service.

Some big changes that have recently been implemented in favor of women are opening combat arms military occupations to women in 2016, as well as 12 weeks of maternity leave now being provided across the services. The Army Physical Fitness test (APFT) was also recently changed to the new Army Combat Fitness Test (ACFT), which she says is a positive change for women because the transition equalizes all genders and all ages as the Army seeks advancement in the organization.

While looking towards the future, Yeager pointed out, “Another policy that stirs debate is perhaps changing the policy to require women to register for the selective service, also known as the draft. In my view this is fair and it’s necessary.”

In March of 2020 The National Commission on Military National and Public Service issued a report stating their case for how expanding the draft registration to women would be an important step in including women in a fundamental civic duty of national defense. “Whether or not women are required to register, we can and we all should work together to make military careers more appealing and more available to women,” Yeager said. “The fact is military service is a great profession with many opportunities and benefits.”

Yeager is pleased with the strides the Army has made in gender equality.

“I am very proud in the steps the Army takes every day in ensuring equity, inclusion, and diversity, it is what makes this Army so great and such a joy to be a part of,” Yeager said.

The event was held at the Sandy Basin Community Center and the theme was, “Honoring the Past, Securing the Future.” It was also streamed live on Facebook.com/NTCfortirwin. The observance was sponsored by the National Training Center and Fort Irwin EO/EEO Offices, along with the 1/11th Armored Calvary Regiment. The next observance will be held on Sept. 30 for Hispanic Heritage Month.