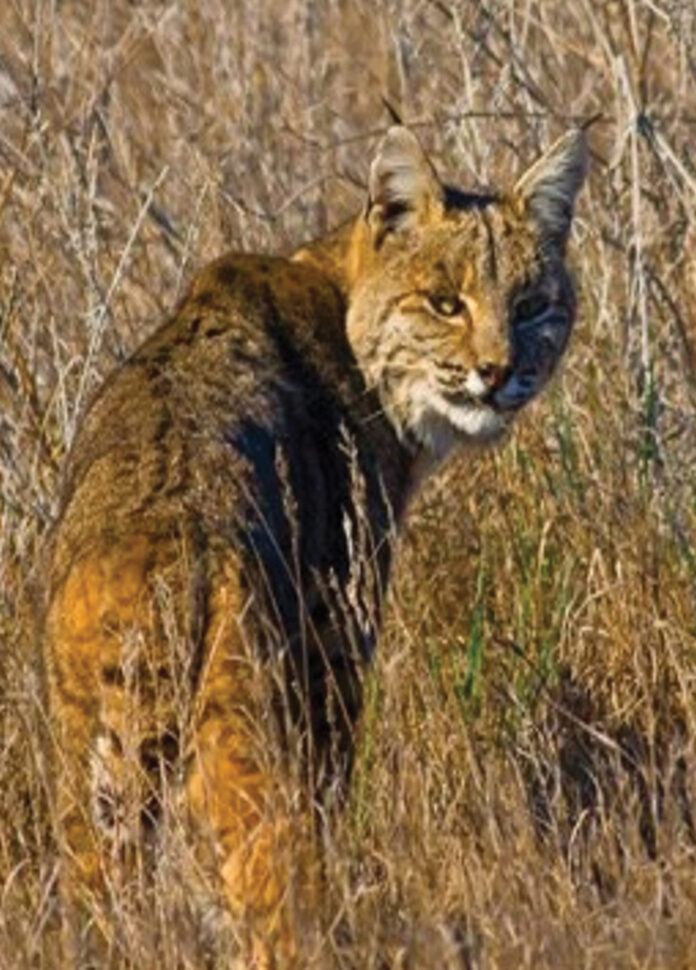 FORT IRWIN, Calif. — The bobcat (Lynx rufus) is a medium-sized member of the North American wild cat family. Bobcats can be distinguished at a distance by a short “bobbed” tail (4 to 6-inches long), round face and pointed ears. Typically, bobcats go unseen due to their quiet and solitary ways. However, bobcat sightings are increasing as they appear to be using urban and suburban settings more often. Bobcats are only one-quarter to less than one-half the size of mountain lion. They are generally two or three times as large as a domestic housecat and more muscular and full in the body.

Bobcats are largely carnivorous but will consume a wide variety of food sources, even some vegetation such as fruits and grasses. Domestic animals can become bobcat prey if left unsecured at night including domestic cats, small dogs, poultry, piglets, small goats and lambs. Because the National Training Center and Fort Irwin are in a rural relatively wild area, it is likely that humans and wildlife will cross paths.

• Do not feed wildlife: This includes deer, raccoons and other small mammals. Predators follow prey. Bobcats can also be attracted to the many birds and rodents that visit bird feeders. Prevent the buildup of seeds and other organic debris that can collect under bird feeders.

• Feed dogs and cats indoors and clean up after them. If you must feed pets outside, do so during daylight hours. Collect food and water bowls, leftovers and any spilled food as soon as pets have finished eating. Water, pet food and pet droppings can attract small mammals and other wildlife, including bobcats.

• Keep unattended dogs and cats indoors, especially from dusk to dawn. Left outside at night, smaller dogs and domestic cats may become prey for bobcats. If a dog is small enough to squeeze through a fence, they should not be left outside. The owner is responsible for their pets’ safety.

• No Repellents, Fumigants, and Toxicants. No chemical repellents, fumigants or toxicants are currently registered for bobcats.

• Removing wildlife involved in a human-wildlife conflict is a temporary solution. Food attractants (food, water, den site and cover) or access to attractants must be eliminated to get to the root of the problem. When possible, coexisting with wildlife is the more sustainable option.

• Translocation. Trapping and relocating wildlife causing property damage may seem like a good idea and an ideal solution. However, this is not a legal option. Bobcats preying upon pets and livestock may be trapped but only under the authority of a depredation permit (www.wildlife.ca.gov/ living-with-wildlife). However, they may not be relocated to a different area and released (they must be released on site or euthanized immediately).

• Aside from not being a legal option, it is not a sustainable solution. Bobcats often return to their original territories after being relocated – putting them at risk for vehicle strikes while crossing highways and busy roads while making their way back. Moving a bobcat into a strange territory puts the animal at a disadvantage as they do not yet know where to hunt for food. It may also create disputes with the resident bobcat that could result in death.

Message to the Army community about recent events at the U.S. Capitol

Message to the Army community about recent events at the U.S....