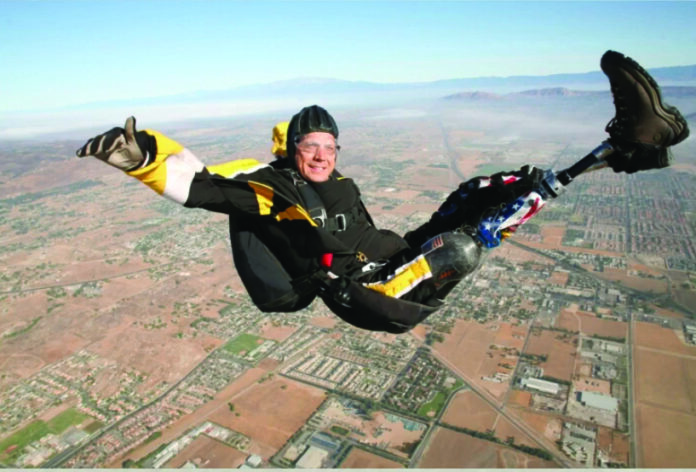 FORT IRWIN, Calif. — In support of the Vice Chief of Staff of the Army’s, “A Life Worth Living Campaign,” the National Training Center and Fort Irwin welcomed Sgt. 1st Class (ret.) Dana Bowman for two days of keynote speaking engagements at the Center Chapel on Oct. 13 and 14. This event was also livestreamed on Facebook.com/NTCFortIrwin, reaching more than 3,000 viewers.

“There a lot of tragedies, accidents and diseases out there,” Bowman said. “If we have one type of a testimony that can help someone overcome a situation or a tragedy, we should share it.”

Bowman served as a Special Forces soldier and member of the Army’s elite parachute team, The Golden Knights. In 1994, a mid-air collision during a practice jump cost him both of his legs and took the life of his partner, Sgt. Jose Aguillon. His determination in the Army resulted in his making history by becoming the first double amputee to re-enlist. Bowman retired from the United States Army in 1996.

“I want people to look at me and say, if he can do it, I can do It,” Bowman said. “I want to be an inspiration to someone who needs it.”

Bowman has earned worldwide recognition as a motivational speaker and skydive demonstrator. His motivational presentations focus on overcoming adversity, mastering change, and reaching your dreams. His motto is, ‘It’s not the disability, it’s the ability…Never Quit!’

“There’s so many people looking for hope, hope for despondent, courage to the timid, and strength to the weak,” Bowman said. “Not giving up is tenacity, it’s the Army way.”

Bowman said that it makes him proud to be able to help people, saying there are a lot of tragedies, accidents, and diseases and if there’s a testimony that can help them overcome situation or a tragedy, it should be shared.

“I am a soldier, Bowman said, “I continue to jump out of planes, and I became a pilot after I lost both of my legs. I live a life worth living.”

Vice Chief of Staff of the Army, Gen. Joseph Martin’s “A Life Worth Living Campaign” focuses on mental health and suicide prevention.

“What’s most important to me is developing relationships at the squad level, maintaining contact—That gives us the ability to understand our soldiers,” Martin said during episode 1 of “Hot Topics & Coffee with the Vice,” posted to social media on Oct. 5, 2020.