November 2019, the U.S. Air Force Academy named its airfield in honor of Air Force Gen. Benjamin O. Davis Jr., the service’s first Black general and the commander of the Tuskegee Airmen in Africa and Europe.

The project to name the previously unnamed airfield was “an incredible journey,” Air Force Academy Superintendent Lt. Gen. Jay B. Silveria said at the naming ceremony. 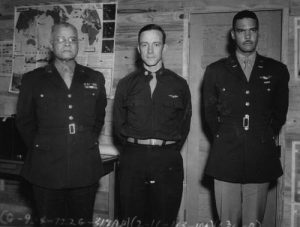 Davis was “instrumental in driving this institution towards a much more diverse and a much more inclusive population, reducing attrition rates of minorities, and crucial in developing the plan to integrate women at the United States Air Force Academy,” Silveria said.

He faced racism throughout his military career. Davis’ obituary in the New York Times noted: “He was ostracized at West Point and then was barred from commanding white troops and turned away from segregated officers’ clubs in the war years.”

While a cadet, Davis had sought to join the Army Air Corps but was rejected because segregationist policies of the time designated the Air Corps as whites-only. Instead, he graduated in June 1936 with a commission as a second lieutenant of infantry. His first assignment was to the all-Black 24th Infantry Regiment at Fort Benning, Georgia.

In early 1941, the War Department began training Black pilots at the Tuskegee Airfield in Tuskegee, Alabama. By then a captain, Davis was part of the first graduating class of five pilots.

In July 1942, now a lieutenant colonel, he took command of the 99th Pursuit Squadron; the Army Air Forces’ first all-Black aviation unit. By the summer of 1943, the unit was in North Africa flying combat missions.

That fall, Davis was called back to Tuskegee to take command of a new unit, the 332nd Fighter Squadron, where he found out that the Army was considering stopping Black pilots from flying in combat. He defended his men in a news conference at the Pentagon.

“All the Blacks in the segregated forces operated like they had to prove they could fly an airplane when everyone believed they were too stupid,” he wrote in his autobiography, “Benjamin O. Davis Jr.: American.”

Army Chief of Staff Gen. George Marshall ordered an investigation, and Davis spoke to the investigating committee, which found essentially no difference in performance between Black and white units.

By then, though, Davis was already back in the fight in the skies over Italy. The men under his command flew more than 15,000 sorties, downed 112 enemy planes, and destroyed or damaged 273 on the ground. His units lost just 66 of their planes and only about 25 of the bombers under their escort.

Davis led dozens of missions in P-47 Thunderbolts and P-51 Mustangs. He received the Silver Star for a strafing run into Austria and the Distinguished Flying Cross for a bomber escort mission to Munich on June 9, 1944.

He would go on to serve in several commands, in Europe and the United States, before the end of the war. In 1947, Davis transferred to the newly created Air Force and was tapped by President Harry S. Truman to help draft the service’s desegregation plan.

Davis’ life served as an example of the power of perseverance, courage, character and extraordinary competence, Air Force Chief of Staff Gen. David L. Goldfein said at the naming ceremony.

“Some have had to bear a heavier burden than others to teach us all what right looks like,” Goldfein said. “Today, we celebrate one of these men.”

Davis’ great-nephew, Douglas Melville, said he would always stress the importance of making the world a better place. “He would always say, ‘Doug if you can only stand tall by requiring someone to sit on their knees, you are the problem.’”

Davis died July 4, 2002, at 89 and is buried with his wife, Agatha, in Arlington National Cemetery in Arlington, Va. In 2017, the U.S. Military Academy named a barracks after Davis.

The academy’s Airmanship Programs; soaring, parachuting and powered flight; operate out of the airfield, which opened in 1974.