FORT IRWIN, Calif. — Capt. Sean Martin had made several attempts to be a contestant on Wheel of Fortune and recently he got his shot.

“I got a call, sometime mid-summer around July (2020) from Wheel of Fortune, saying that they were going to be starting back up and establishing some new recordings and they wanted to know if I was interested in auditioning.”

Martin serves as the Troop Commander of the Regimental Headquarters and Headquarters Troop for the 11th Armored Cavalry Regiment.

The last time he’d applied for Wheel of Fortune was back in Spring of 2020, just before COVID-19 shut down operations.

“They let you apply online, so over the years occasionally I’d apply, upload a picture and show interest,” Martin said. “My wife and I, and actually our older daughter, Laney, watch Wheel of Fortune almost every day. We’re big fans of the show and we’ve watched it for years.”

He then took the next step.

“I agreed to do an online video audition with a couple of other contestants, which lasted about a half hour or so, going through different toss-up challenges and various other things, different word puzzles,” Martin said.

He was informed shortly afterward that he had been selected to tape in September 2020. The show was looking for Southern California residents who didn’t have to travel far to conform with COVID-19 restrictions, but during that timeframe, the military was under strict travel restrictions, so Martin had to decline.

Fortunately the show was very understanding and left the invitation open.

Once the October Block Leave period was announced at NTC, Martin said, “I brought it back up with my chain of command…and they blessed off on it. So, then I reached back out to ‘Wheel,’ they had availability for a taping that I round up being apart of in October.”

Martin’s taping was Oct. 8 and the show aired on Dec. 15 but Martin didn’t get to see it until the next day.

“Dec. 15 did fall during the holiday block leave period for the 11th Armored Cavalry Regiment,” Martin said. “I took advantage of that time, unfortunately for my family, to take a Cavalry Leader’s course on post, so my wife and kids were able to watch it with their family in Chicago. I was back here plugging away on a course. I actually didn’t see it live or even that day. I think I saw it the next day.”

On the day of taping, Martin said the other two contestants were fun to be around, especially the big winner.

“Yes, Diana she is a bundle of energy” he said. “What you saw on TV is her in real life. She was a very energetic person. I remember at the first commercial break, myself and the other individual on the show, we felt a little bit bad that going into the first commercial break that she didn’t have any money yet and I could tell she was nervous, so I remember telling her ‘don’t worry Diana, you’ve got this. And she did, she had it, she did quite well with her, I believe it was $58,000 that she won.” 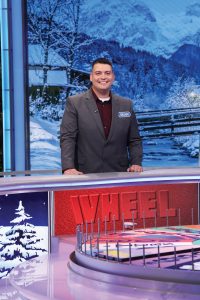 Due to COVID-19 mitigations, the contestants didn’t get a lot of close contact with them but overall, Martin says host, Pat Sajak and hostess, Vanna White were nice to work with.

“We didn’t have too much face-to-face, except when we were up at the wheel, that was with Pat,” he said. “Vanna did come and say hi to the group while we were waiting outside earlier in the morning when she came in to start doing makeup. Very pleasant, came and said hi individually to everybody. With Pat, he’s definitely quick at cracking jokes, makes everyone feel comfortable.”

Martin said Sajak was a good guy and appeared to be well respected on that set.

“He wasn’t just the host, he had a lot to say on some of the behind-the-scenes operations,” Martin said.

Martin was also impressed with the voice-over announcer, Jim Thornton. There’s no live audience during coronavirus tapings—only the crew and the cast.

“So in between episodes, we spent a lot of time chatting with Jim, the announcer,” Martin said. He’s a great, phenomenal guy, very interesting individual.”

Martin wasn’t the top prize winner on the show but he did win $3,950. He said he didn’t find any tricks or secrets to spinning the wheel, though.

“I am not the one to ask,” he said. “I had three spins— two were lose a turn— which I didn’t realize at the time because it goes by so fast, but then watching it on replay I was like ‘oh man, I really did have a chance.’”

He said winning on the show is a lot more luck than he thought it would be.

“I definitely thought it would be 90% luck, 10% skill and the wheel had some other things in mind for me but I’m very thankful for the opportunity to win what I did,” he said.

Martin said he’s already been told where his winnings are going.

“My wife and daughters have already informed me that it’ll be Disney money,” he said.

He doesn’t think he’ll try to be on any other game shows but enjoyed his quick moment.

“My wife likes Jeopardy, I’m not as good at that one,” Martin said. “I had my chance at the puzzles I’m good at.”

Martin, said he knows Wheel of Fortune producers were looking for contestants with good on-screen personality and although he doesn’t think he’s known for personality, the overall experience was enjoyable.

“Being on TV was certainly never a goal of mine, which is ironic given that I applied for it,” Martin said. “I just thought, I like playing the game at home and thought, sure, I’ll give it a go, it looks pretty fun, I enjoy word puzzles, and then they called me and I just couldn’t say no.”