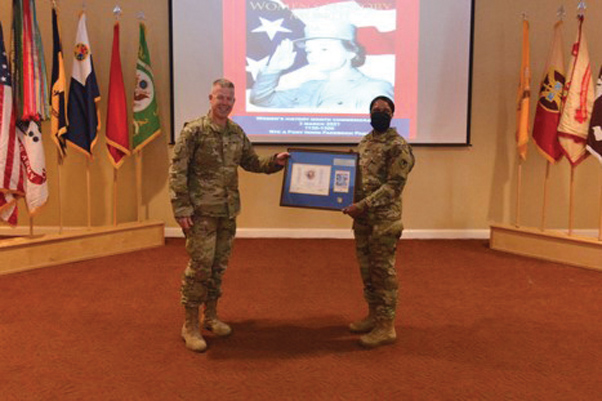 The event kicked off with a video highlighting women who have made changes and strides, not only in the military but also through their community and public service.

The theme for March’s commemoration was, “Working to form a more perfect union: Honoring women in public service and government,” and the MEO/EEO office partnered with the Operations Group to host the event.

The video touted brave women from all cultural backgrounds who succeeded against great odds in all levels of public service and government. It featured women such as Bernice Sandler who fought for women’s rights in education, Suzanne Harjo who helped shape a national Native American Policy agenda, American politician and diplomat Madeleine Albright, Puerto Rican activist, Isabel Gonzalez, and Kamala Harris, the first female, Black, Asian vice president of the United States.

Martin started off her remarks by remembering the “many greats,” such as Susan B. Anthony who was arrested after attempting to vote, and Sojourner Truth who demanded a ballot but was turned away.

Martin illustrated how far the Army has come with equality by displaying the classic toy soldiers that many grew up playing with. Martin had the chance to meet a young girl, Vivian Lord, who wrote a letter to a toy company, requesting the soldiers be made as “Army Women” and not just men.

“This past Christmas holiday, they were joined by female toy Soldiers,” Martin said. “The company decided to integrate its plastic Army toy soldier based on a request from female veterans and a very persuasive letter from a six-year-old girl.”

Martin then highlighted women who have served distinctively from the Revolutionary War through today.

They included Margaret Corbin, who manned a cannon during the attack on Fort Washington as her husband died alongside her; Harriet Tubman, who served as a spy for the Union Army; and the only woman to receive the Medal of Honor by a president, surgeon Mary Walker, which has a clinic named after her on post.

Martin praised the 35,000 American women who volunteered to serve in the military during World War I and were part of the Army Nurse Corps, as well as the 140,000 who served as members of the Women’s Army Auxiliary Corps during World War II.

With this year’s theme recognizing female public servants, Martin also wanted to mention an historic moment right in one of the City Councils of the High Desert.

“This past December, in Victorville, we saw the beginnings of the first all-female City Council with Debra Jones appointed as mayor, as well as Leslie Irving as mayor pro tem,” Martin said. “This is the first time in more than 58 years that five women represent residents inside council chambers since the city’s incorporation in September 1962.”

Martin called women ‘groundbreakers’ and an ‘inspiration’ for future generations.

“It is the job done by those of us serving today, which will continue to open those doors of opportunity,” she said. “So, as we respond to the pressure to be silent, there may be surprise, hostility, and a social pushback. We must remind ourselves that it is our right to breathe, talk, to share our voice and ideas and insights—even if they are not polished, perfect, or vetted by a committee. We must remind ourselves that it is time and that we are doing this not only for ourselves but for our daughters and sons and the generations to come. It is our right to be heard and to be valiant.”