FORT IRWIN, Calif. — The winners of Fort Irwin’s Soldier and Non-Commissioned Officer of the Year competition were announced on the NTC Fort Irwin Facebook page livestream on May 6 during the annual Best Warrior Competition Award Ceremony.

“During the three-day competition, these warriors were challenged at every possible level,” said Master Sgt. Ericka Perez. 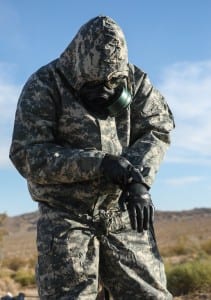 “I am tremendously impressed by the great sergeants and future sergeants sitting here today,” said Brig. Gen. Curtis Taylor, Commanding General of the National Training Center. “Each one of the soldiers has been tested in every manner, physical, mental, and through the board process. I can’t be more honored to present the awards to you.”

The competition kicked off with the soldiers taking the new Army Combat Fitness Test (ACFT), followed by a written examination and an oral board. Events also included a ruck march, rifle, and pistol testing, a land and night navigation exam, and a mystery exam which encompassed a chemical attack in which the competitors had to put on their Mission Oriented Protective Posture (MOPP) Gear.

“I had the opportunity to interject myself a few times during the competition,” said NTC Command Sgt. Maj. William Justice. “During the foot march they walked me into the ground badly, and then I got to go out and watch them at the nighttime navigation exam. What I can tell you is that these candidates absolutely killed it— they were fantastic. They operated under difficult conditions— these NCOs and soldiers never quit and pushed it through the end.”

The winner of the Soldier of the Year Category was Private 1st Class Todd Shaffer and was awarded the Army Commendation Medal from Taylor.

“I am beyond humbled to be this year’s winner and represent this installation now facing bigger fish throughout the entire Army,” Shaffer said. “What people don’t see are the late nights we’ve spent studying the endless information on ADPs, making sure our ASUs are clean and pressed and correctly measured to the T, early morning PT (physical training) on your own before your unit even does PT to set yourself apart.”

The NCO of the Year for the National Training Center and Fort Irwin was awarded to Staff Sgt. Asheil Allen, who was also awarded the Army Commendation Medal.

“I am extremely humbled to have won this year’s competition,” said. Allen. “Being selected as the NCO of the year was an unbelievable feeling. Even with all the preparation and hard work, there was still the feeling of doubt.”

Allen’s message to future competitors is simple: “Push yourself to the limit and stay determined,” she said. “In the end it will pay off.”