FORT IRWIN, Calif. — What was described to be the start of a routine October morning out in the (training area) Box, turned to a potentially deadly one, as a brake-line failure caused a Humvee to lose control. Thanks to his training and actions, Spc. Frank Yaguas, was able to save the lives of his fellow soldiers within the vehicle.

“It was a typical morning in the Box,” Yaguas said. “We woke up, got into our Humvee and started scouting for positions on mountain sides as the rotational battle was going on. The first position we scouted wasn’t the best and we knew we needed to drive down the mountainside and find a new one.” 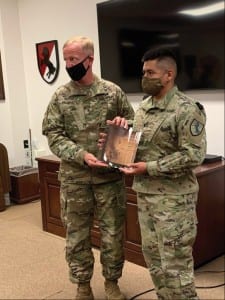 While driving down the mountainside, Yaguas started to apply the brakes on his Humvee, but to no avail.

“As we were going down, I started to put some pressure on the brakes to maintain my speed, but quickly realized even putting my entire foot on the brake, the Humvee was still gaining speed,” he said. “I heard my sergeant yell ‘e-brake,’ but even when I pulled the lever the vehicle did not slow down.”

As the vehicle was going downhill, at a fast rate of speed, the doors flung open and the gear and equipment of the soldiers started falling out.

“I just remember yelling to my guys to hang on, and tried maneuvering the Humvee into a small ditch,” said Yaguas. “That very moment, the vehicle went airborne for about five seconds, and when we landed in the ditch, the Humvee completely stopped.”

Once the vehicle was stationary, Yaguas ensured that his fellow Soldiers inside the Humvee were okay and reported no injuries.

“Spc. Yaguas’ attention to detail was unmatched within Fury Troop,” said Sgt. 1st Class Timothy Gardner, Yaguas’ platoon leader. “He always looked and acted in a professional manner. Although he’s not in my platoon anymore he is still missed.”

Unknowingly to Yaguas, he was nominated for The Army Safety Guardian Award, which is awarded to individuals through extraordinary actions or skills, who react to an emergency event or an imminently dangerous situation, thereby eliminating or minimizing loss, such as damage to Army property or injury to Army personnel.

“I get a call one morning telling me to get a haircut, and to wear my best uniform on the April 27, but I had no idea what was going on,” he said.

The Commander of the U.S. Army Combat Readiness Center, Brig. Gen. Andrew Hilmes, was visiting the NTC, to interact with Senior Commander’s and Garrison safety offices to understand the challenges they face and awarded Yaguas The Army Safety Guardian Award. “Throughout the COVID-19 Pandemic, we couldn’t give these awards in person,” Hilmes said. “This is the first award I’ve awarded in person in over a year.”

Looking back at the event that happened in October, Yaguas credits his Army training, attention to detail, and his mentorship with helping him make the right decisions under immense pressure. “The second we all got out the Humvee and I knew my guys were okay, I took a big sigh of relief.”