The flyover for the game was supported by the U.S. Army’s 2916th Aviation Battalion “Raptors,” who support the National Training Center at Fort Irwin, Calif., with world-class aviation capability. 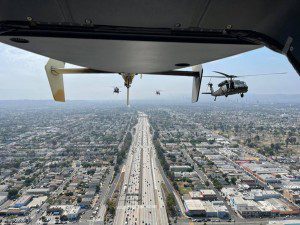 The “Raptors,” a subordinate unit of the 916th Support Brigade, use rotary-wing aircraft and unmanned aerial systems to provide precision air lift, medical evacuation, and aerial reconnaissance to the National Training Center. Denoted by some of the aircraft’s unique color schemes, the Raptors also provide adversary aviation threats to units training at the NTC. The aircrews you saw today work tirelessly year-round in the desert to train your Army’s brigade combat teams to win in the most demanding conditions.

This was the 25th edition of the annual Major League Soccer All-Star Game.

Matt Turner made two saves in a penalty shootout, and Ricardo Pepi scored the decisive goal in the fifth round to give the MLS All-Stars a victory over the Liga MX All-Stars from Mexico on Wednesday in Los Angeles.

The match was tied 1-1 after 90 minutes before going straight to the five-round penalty shootout, which MLS won 3-2.