Operations Group was officially activated on Oct. 3, 1982, at the National Training Center and Fort Irwin.

“…And the Training Begins” was the headline in the post paper, The Combined Arms Monitor in January of 1982. The feature story, by Norm Brotham, explains how the “original concept” of Operations Group was about to come to life and started gearing up to run the show at the NTC. The unique multi-million dollar operation had one goal, to better train the Army’s combat units. Technicians, operators, and observer controllers will be equipped with state of the art computer systems, video/audio equipment to include Mobile Video and After Action Review vans and provide the best method of critiquing the Rotational Units to ultimately save lives during real combat. Army officials, at the time, believe that the National Training Center’s concept would be the greatest improvisation to training history.

Once in motion, the Observer Controllers, now called OC/Ts played the important role of mentor, coach, and trainer to task force level combat units. With the establishment of the “Green Team” or Scorpions Observer Controllers. The Operations Group was able to provide the mechanized units with the knowledge and guidance from seasoned leaders. Within just a year they added the “Blue Team” or Cobras to do the same for the armored units rotating through the National Training Center.

Operations Group has come a long way from its two original OC Teams. Now it has more than fifteen teams supporting a full spectrum of operations ranging from infantry to logistics.

“It is a great honor to be able to be trained, train, and support the training of our great Armed forces that will improve the Army’s success on the battlefield,” Sgt. First Class Ret. Tom Gambrell said.

Gambrell performs several functions in the Operations Group from being a Soldier training in “The Box.” To being stationed at the NTC in 1997 as an OC/T. After leaving the Army, Gambrell continued to work at the National Training Center in the Wolf Team for six years. Now he serves as a supervisor in the Operations Control Center. 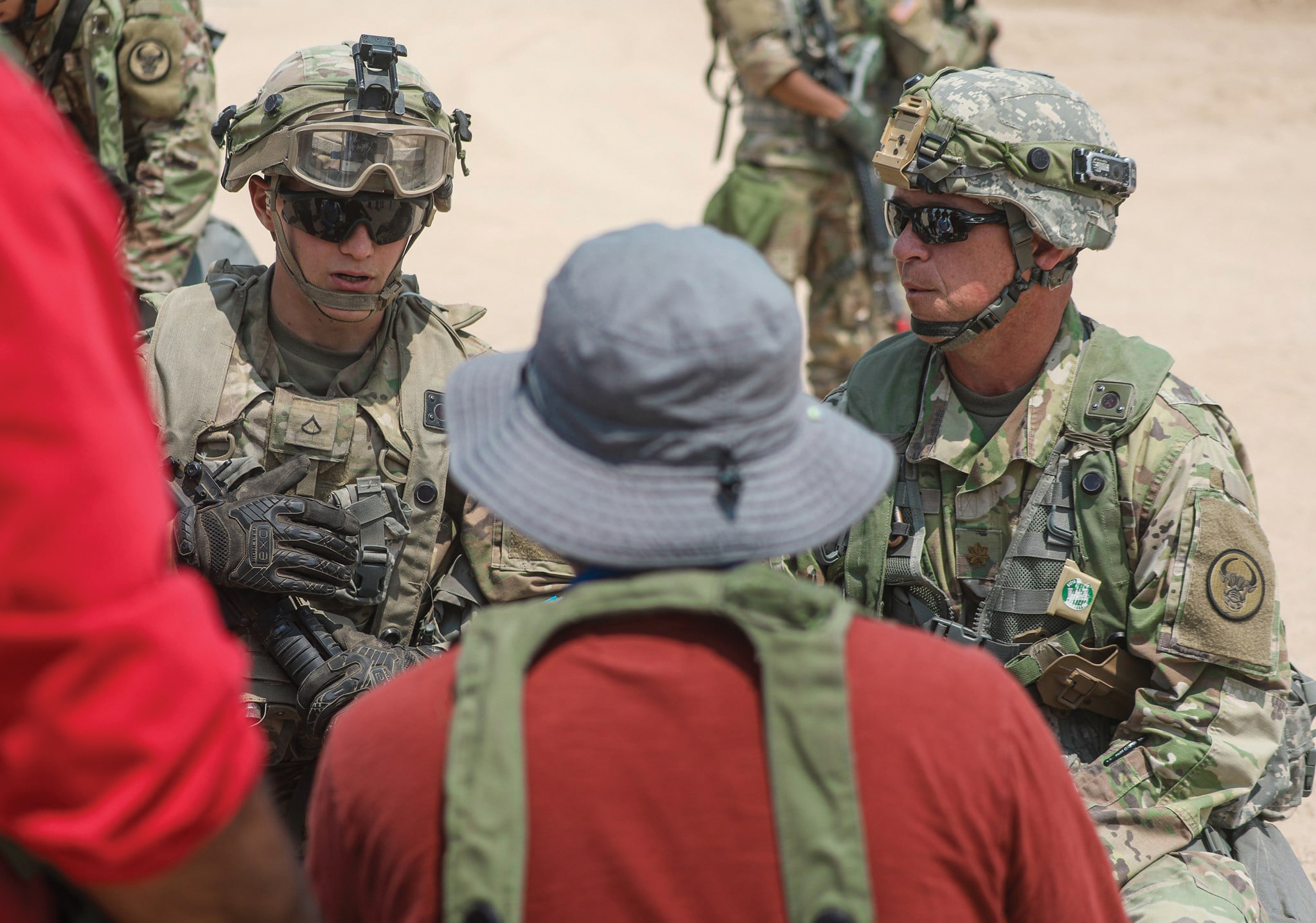 The creation of additional specialized OC/T teams and Headquarters staff made the transition from battalion to brigade level operations possible. The training landscape has changed over the decades at the National Training Center. In the beginning training scenarios primarily focused on Russian Military Doctrine and conventional warfighting functions. As the Army looked ahead to meet the needs of military operations around the world. The NTC and the Operations Group senior planners would have to adapt the training scenarios. The counter insurgency (COIN) rotations are developed to prepare soldiers and leaders for the complex social and political environments found on deployment to Iraq and Afghanistan. Currently, the rotational units face insurgent, counterinsurgent, and criminal activities during the Decisive Action Training Environment replicating future warfare.

“I am proud to be a part of the soldier’s training. We train the world’s best Army to fight our enemies abroad and return home safely,” Darin Christopher said.

Christopher has been a part of the Operations Group contractor support since 1991. Until 1995, he worked as a computer operator, monitoring the live battle data being feed into the Operations Center, also known as the Star Wars building. He then transitioned to the Brigade Tactical Analysis Facility or TAF to become part of the Bronco Team.

As the National Training Center prepares our Army for future conflicts. Keeping up with the ever-advancing technology has become a necessity. To ensure the relevancy of the training, the Operations Group has modified the rotational scenarios to include electronic warfare and cyber reconnaissance.

Operations Group soldiers, civilians, and contractors work together like a well-oiled machine. Many of the civilians and contractors are prior military or have more than fifteen years on the job. Their skill and consistency have provided the Observer Controller Teams. The organization with the foundation has aided in its success for almost 40 years. During the rotation, the control centers provide 24 hours of constant support and feedback to the RTU. They monitor all radio traffic, collect battle data, record and broadcast live footage from the field, create AAR training material, mentor and coach during each battle period AAR and so much more. All of this ensures that the RTU goes back to their home station fully prepared for what lies ahead.

As the 400th rotation here at the National Training Center comes to a close. The Army’s concept of creating a premier training facility was brilliant. It has contributed to the betterment of thousands upon thousands of U.S. Soldiers and leaders. It has and will continue to be the most realistic and adaptive training scenario environment in the world.