Across California’s Mojave Desert, U.S. Army combat units hone their skills against opposition forces from the 11th Armored Cavalry Regiment during the decisive action rotations designed to keep them ready for any contingency or conflict.

As the U.S. Army transitions from decades of counterinsurgency operations, training rotations are focused on preparing maneuver units for large scale combat operations against an enemy that could use chemical, biological, radiological, and nuclear weapons.

Headquartered on Aberdeen Proving Ground, Maryland, the 20th CBRNE Command has Soldiers and civilians stationed on 19 bases in 16 states who deploy around the world to take on CBRNE threats in support of military operations and domestic civil authorities.

Maj. Chris A. Chavis, the 2nd Chemical Battalion operations officer, said Decisive Action Rotation 21-10 was one of the largest rotations at NTC since 1985 and included an unprecedented amount of CBRN munitions used on a rotational unit. The battalion began preparing for the training rotation with the 1st ABCT earlier this year.

The rotation presented many dilemmas to the entire 1st ABCT team to include fighting against a peer-like competitor with a robust CBRN delivery capability, said Chavis.

“This was my fourth NTC rotation in my career and by far the most CBRNE intensive training experience at a Combat Training Center,” said Chavis, an Operation Enduring Freedom veteran from Niceville, Florida.

Chavis said the battalion adapted quickly by designating pre-determined decontamination elements to areas of the battlefield instead of focusing on particular units, while keeping the brigade elements informed. 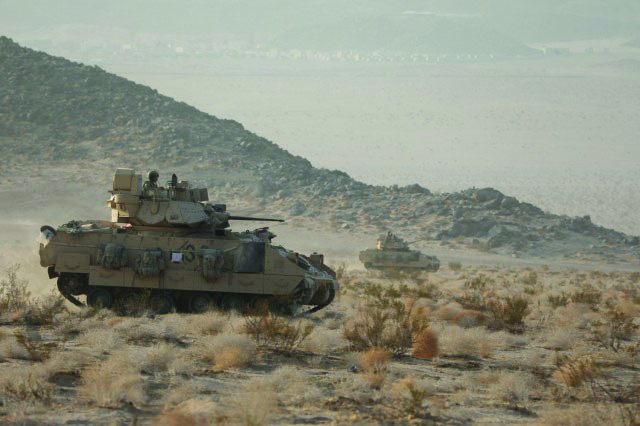 Sharing the information with all elements within the brigade area of operations better prepared the units to confront and defeat CBRN threats, said Chavis.

The 2nd Chemical Battalion has both decontamination and Weapons of Mass Destruction elimination capabilities with Hazard Assessment Platoons and CBRNE Response Teams that can limit enemy CBRN research and development capabilities. The battalion’s Nuclear, Biological, and Chemical Reconnaissance Vehicles also provide early warning, detection, and surveillance of CBRN threats on the battlefield.

“These capabilities will no doubt save lives and protect the force in order to maintain the lethality of our Soldiers in the next large scale combat operations environment,” said Chavis.

“The Soldiers of 2nd Chemical Battalion, the Red Dragons, not only participated in one of the largest decisive action NTC rotations in recent memory, through their contributions to NTC 21-10, they immeasurably improved the readiness of our brigade as we prepare for a rotational deployment to the Republic of Korea. It was a true privilege to integrate with and learn from the Red Dragons team,” said Fairless, a native of Flint, Michigan, who has commanded the “Ready First” brigade since July 24, 2020.