The ceremony bade farewell to Command Sgt. Maj. Paul Fedorisin, who served as the garrison sergeant major for more than two years. 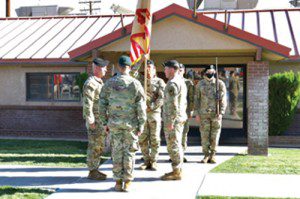 “What CSM. Paul Fedorisin accomplished as a garrison command sergeant major is absolutely phenomenal,” said Col. Jason Clarke, Fort Irwin Garrison Commander. “He is the epitome of what a sergeant major should be, he is intelligent, dynamic, a team player, and a collaborative leader that generates a positive command climate throughout.

Over his tenure as Command sergeant major at Fort Irwin, Fedorisin conducted more than 1,200 community outreach events, building relationships throughout the High Desert, as well as Los Vegas, and Southern California. “His outreach resulted in a significant change to the Fort Irwin community to the sum of $30 million,” said Clarke. In addition to the $30 million dollar investment brought to Fort Irwin, Fedorisin helped secure more than $180 million for three new barracks complexes slated to begin after his tenure. “He did all this while executing priorities for three different commanding generals, two new garrison commanders, and one new deputy garrison commander, managing the COVID-19 pandemic, going to college, but among all being a father and a husband.” Clarke continued. 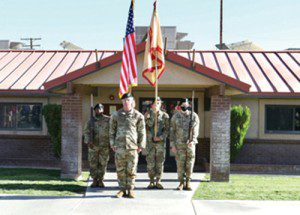 During his speech Sgt. Maj. Fedorisin thanked the multitude of people who entrusted him with his position. “Because of their collective effort, the Army and our partners have committed roughly half a billion dollars to Fort Irwin over the next 7-8 years,” Fedorisin said. “Our mission would not be successful if not for your support and teamwork.”

Speaking at his Assumption of Responsibility, Command Sgt. Maj. Larson stated that he was honored to serve as the newest Garrison Sgt. Maj. and thanked Fedorisin for a smooth transition.