In celebration of Native American Heritage Month, meet Sgt. Andrew Henson, a 19D, Cavalry Scout, assigned to Headquarters and Headquarters Troop, 2/11 Squadron. Henson is from Visalia, California. He has been at Fort Irwin for three years and joined the Army in his cousins’ footsteps.

Henson enjoys his Military Occupation Specialty (MOS) because he likes conducting patrols and exercising the Rotational Training Unit’s ability to conduct firefights through fire and maneuver during rotations. Henson was a machine gun expert on the 240B at his last unit and enjoys training Soldiers on weapons systems.

“My goals are to earn my Expert Soldier Badge (ESB) and to gain as much school and training as I can,” said Henson. “My long term goal is to earn a Commercial Driver’s License (CDL) and to get certified in Hazmat to be a Hazmat Commercial Driver. 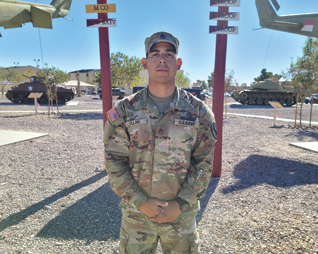 Meet Staff Sgt. Charles Yllan III, an 11B, Infantryman, assigned to F Troop, 2nd Squadron, 11th Armored Cavalry Regiment. Yllan is 27 years old and is from Madera, California. He enlisted in May 2016 and has been stationed at Fort Irwin since August 2020.

Yllan enjoys his Military Occupation Specialty (MOS) because he likes working with weapon systems, learning battle drills, and working with heavy mechanized armored vehicles. Yllan’s grandfather served in the Marine Corps and his uncle served in the Army as a 19K, M1 Armored Vehicle Crew Member, during Operation Desert Storm. His long-term goal is to become a police officer and earn a bachelor’s degree in business.

“I am part Navajo as my grandmother is part Navajo and her roots come from Mexico, I think it’s important to know where you’re from and know your roots and heritage.” 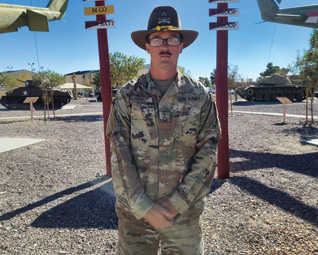 Blauvelt enjoys his Military Occupation Specialty (MOS) because of the large weapon systems and the fast-moving track vehicles. Blauvelt has many family members who have served in the military, including his father, grandfather, and great grandfather. His goals are to become a Drill Sergeant or Instructor and before retiring from the Army.

“Look into your family history for those who served before you and find out their story, I am Muscogee and Mohawk, and it was great to learn about my heritage and the stories.”