Fort Irwin, Calif.— Over the past year the National Training Center and Fort Irwin’s environmental team has been hard at work partnering with, the California chapter of the Wild Sheep Foundation, the Society for the Conservation of Bighorn Sheep (SCBS), and volunteers to install a water guzzler for the Desert Big Horn Sheep, native to the Mojave Desert.

The SCBS has allocated $25,000 for the recommended six Guzzlers that will be needed in the National Training Center foot print. 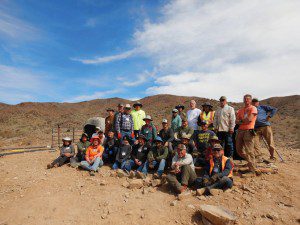 “There were over 50 volunteers from across the state that came to our desert to assist with the long term survival of the wildlife here. We all lived and worked together during the construction of this project. It was great to see the energy and collaboration that went into this project,” said David H. Davis, M.S., CWB®, Certified Wildlife Biologist, U.S. Army National Training Center Fort Irwin.

The new walk-in drinker feeds off of three 2300-gallon storage tanks to create a high capacity watering system for desert bighorn sheep, mountain lions, quail, tortoise and other native wildlife that will aid the animal’s long-term survival during unseasonable droughts.

Wildlife water guzzlers are designed to be self-sustaining. They replenish off of a simple gravity fed catchments systems that gather rain and snow that is then stored in the reservoir tank. Water guzzler collects the majority of water during the seasonal rains which occur between December and March of each year.

Davis said all of the volunteers played a vital role in the construction of the guzzler, from lending their expertise in site location reconnaissance and installation, Gracious Funding, to manual labor, the CA Wild Sheep Foundation Wildlife, Boy Scout Troop #77 out of Twentynine Palms and other volunteers from California Department of Fish and Wildlife all worked tirelessly to assist Fort Irwin in the completion of the project.

“It is important for our youth to participate in projects like this because it gives them an awareness at an early age and an appreciation of our Desert’s ecosystem and the challenges it faces,” said Kennith Charles, Assistant Scout Master for Troop 77.

The youth from Troop 77 are residents of the Mojave Desert, Charles said that this project emphasized how important water is to the continued preservation of our Deserts Big Horn Sheep population.

Steve Marschke from the SCBS said that the guzzler completed near the South Avawatz Mountains was named ‘CC Tank’ in honor of John Carnakis and Dick Conti, both of whom were former SCBS presidents.
Fort Irwin has pledged to be environmentally responsible,” said Col. Jason Clarke. “Environmental initiatives such as this will insure the preservation of the wildlife in this area.”

Big horn sheep have always played an important role in the desert eco-system, early Americans drew petroglyphs depicting these animal figures noting their importance. In recent years the large animal’s numbers have been falling due to changes in land use, and lack of water resources, according the Bureau of Land Management.