FORT IRWIN, Calif. — Secretary of the Army Christine Wormuth visited the National Training Center and Fort Irwin on April 11-12 to observe firsthand the NTC’s role of training Brigade Combat Teams (BCTs) for combat operations anywhere in the world. This visit marked the Secretary’s first to the NTC and Fort Irwin.

Brig. Gen. Curtis Taylor, Commanding General of the National Training Center, stressed the importance of providing tough and realistic training for visiting units in his brief to the Secretary. “We’ve designed our rotations in a way that units face their hardest day in combat here so that they are better prepared to face any threat on future deployments,” Taylor said.

With more than 1,200 square miles of unencumbered terrain, the NTC is the U.S. Army’s largest Combat Training Center and has ensured Army Readiness for more than 40 years. Its remote location provides combat formations the ability to face realistic training scenarios on the land, in the air, and in cyber and space domains that their home stations cannot provide. 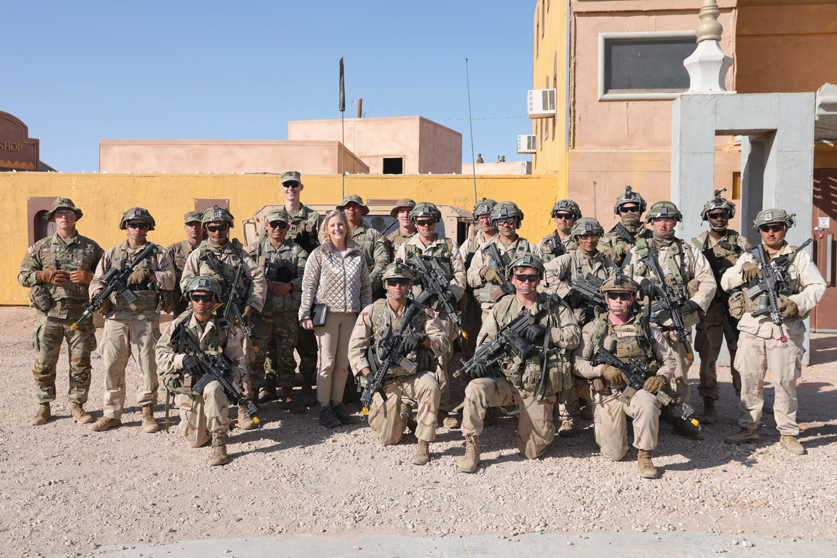 Wormuth stated that she was incredibly impressed with how the 11th Armored Cavalry Regiment, the NTC’s professional Opposing Force, have adapted its training to prepare units for the future battlefield.

“With the establishment of Task Force Reaper, we are constantly observing and adapting to replicate future threats,” said Cpt. Trevor Brown, 11th ACR INFOWAR Planner. “By rapidly gaining and maintaining the information advantage we are able to provide multi-domain challenges for BCTs.”

During her multiday visit, Wormuth took the time to view several of Fort Irwin’s quality of life initiatives and met with spouses, families, and children. “We recruit Soldiers, but we retain U.S. Army families,” Wormuth later said at the Cactus Corner Child Development Center stressing the importance of putting people first.

With the Army’s creation of the Quality of Life Task Force, the NTC and Fort Irwin have seen significant investments towards its people and infrastructure to include a new post library, Starbucks drive-thru, and remodeled post “Reel-Time” theatre. A recent BAH increase ensures on-post housing remains modern and an assignment incentive pay of $4,800 is available to Soldiers who preference Fort Irwin in the AIM 2.0 and ASK-EM portals. “To train the best, we have to be the best,” said Taylor. “We’ve seen close to $17 million in projects have been completed, around $35 million in progress, and over $300 million programmed over the next decade. We’re thankful for the Secretary coming to visit the NTC.”