In an effort to showcase the U.S. Army’s modernization efforts, Soldiers with 41st Transportation Company from Fort Polk, Louisiana, arrived for their April rotation at the National Training Center with a fleet of modified Palletized Load System vehicles.

The modification? The transport vehicles included kits which allow the vehicles to operate both autonomously or semi-autonomously. 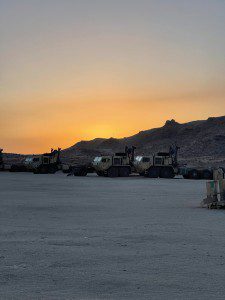 There, select Soldiers with the 41st Trans. Co., including Sgt. Brian Killebrew, received firsthand training on the ATVs, which enable existing manned vehicles to be converted into semiautonomous robots.

“Throughout the month of October of PC21, we were in constant robotics training,” said Killebrew, “It took about two weeks to understand the basics of the vehicle and how to operate it.”

According to the Ground Vehicles Systems Center by leveraging the autonomous capability, ground commanders will have the ability to run 24/7 logistical support while mitigating the risk of Soldiers being exposed to attacks by the enemy.

There are currently three main ways of operating these ATVs, according to Killebrew.

The first mode, teleoperation, allows users to control the ATV via a controller, similar to that of a video game console, Killebrew said.

“The second feature is controlling the ATV to follow a GPS waypoint path that we draw out,” Killebrew said. “The third feature is called leader follower, [where] a single lead vehicle can control up to nine unmanned vehicles.”

Prior to the April 2022 rotation, the ATVs belonging to the 41st Trans. Co. have logged more than 281,551 miles, with over 6,162 miles logged with a safety driver onboard, and more than 2,115 miles logged while being fully autonomous with no drivers on board.

“Our office was tasked to identify locations in which these ATVs can be deployed and contested in as close to a real-world scenario,” said Hector Vazquez, logistics management specialist with Army Futures Command. “The National Training Center offers just that, its vast and difficult road network coupled with a brigade-sized element allowed us to test almost every aspect of the ATVs.”

While at the National Training Center, the ATVs drove close to 200 miles autonomously with no passengers, with another 200 miles driven “manned-unmanned” in which the passengers riding in the ATV did not operate it.

“To garnish these miles at the NTC is an outstanding feat for Army modernization,” said Vazquez.