Soldiers from each unit teamed up and went head-to-head in multiple events including a tank pull, flag football, and combatives.

In the end, the team from 1st Squadron, 11th Armored Cavalry Regiment won the Commander’s Cup. 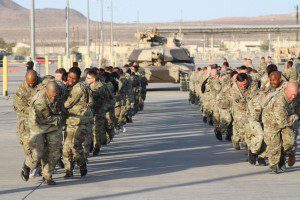 “I enjoy any type of competition, and this week provided multiple events to do that,” Furtick said. “I get super excited to play sports, play cards, cook, whatever, but watching all of the Soldiers’ enthusiasm and drive to win was the most rewarding part of this week.”

The commanding general of the NTC, Brig. Gen. Curt Taylor, oversaw the competition.

“Desert Warrior Week is all about building team cohesion and camaraderie after four months of very intense training,” Taylor said. “Soldiers join the Army to be a part of an elite team [and] the events this week are designed to reinforce the teamwork that makes the Army such a great place to serve.”

The installation included the community by encouraging them to cheer on their Soldiers and participate in a family obstacle course and spouse kickball tournament.

“We are in the middle of a six-rotation, back-to-back sprint here at NTC and the team has been working hard,” Taylor said. “This week gives us a priceless opportunity to focus on our teams and on our families.”

Furtick said hoisting the trophy is always an energy boost for a team. 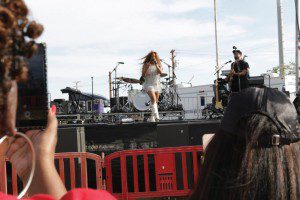 Furtick said he encourages his Soldiers to compete and win whenever an opportunity presents itself.

“We fight every rotation to win,” Furtick said. “The 11th ACR has to win in the box, and this shows again that we win whatever we focus on.”

Following an award ceremony for the winners of the Commander’s Cup and individual categories of the competition, Desert Warrior Week concluded with a “Concert in the Park” featuring country music artist Mickey Guyton.

“What makes NTC one of the best assignments in a military career is the close-knit community and tight teams we form at this remote location,” Taylor said. “My hope is that this week will reinforce the close community bonds that make Fort Irwin a great choice of assignment.”