The Distinguished Visitor Box Tour brings together civilian leaders of various industries with Soldiers at Fort Irwin to showcase the mission of the NTC and how Soldiers train. 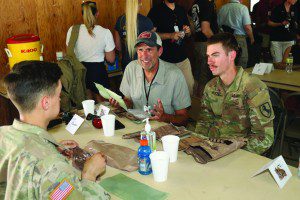 More than 80,000 Soldiers train in the 1200-square-mile training area at the NTC, known as “the box”, every year in preparation for deployment and the guests on the tour got to experience a part of it.

Brig. Gen. Curt Taylor, commanding general of the NTC, said the event is an opportunity to showcase the critical mission that the National Training Center and Fort Irwin play in the readiness of the Army.

“To maintain that vital link to the public we defend, we all must take advantage of every opportunity to tell the Army story,” Taylor said. “Fort Irwin is the only active duty Army post in a state of over 39 million Americans, [and] if we don’t tell our story, it won’t get heard.”

“Americans need to trust that if their sons and daughters choose to serve their country in the Army, we are going to invest in them and take good care of them,” Taylor explained.

Kurt Sutter, a writer and creator of the television show Sons of Anarchy, visited Fort Irwin the second day of the tour. 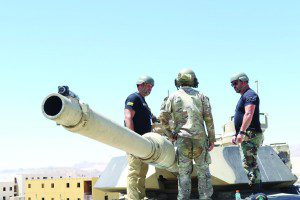 “I have a fanbase that contains a lot of military and I’ve had a lot of contact with the military over the years, but nothing that’s been this hands on,” Sutter said. “It definitely gave me a better insight to the level of commitment, the struggles, and the needs of our military and in that way, it was very eye opening.”

Sutter and other guests received a welcome from Taylor that included the history and mission of Fort Irwin and the NTC.

During the immersion part of the tour, guests had the opportunity to fire multiple weapons systems, climb inside tanks and Humvees, and put on helmets and body armor and fire M4 carbines during a patrol lane.

Chad Brown, the chief marketing officer with Virgin Hotel Las Vegas and a U.S. Army veteran, served in 11th Armored Cavalry Regiment from 2000-2001 and said the installation as well as the training had changed for the better.