The desert tortoise is one of most elusive inhabitants of the desert, spending up to 95% of its life underground.

Desert tortoises live in a variety of habitats — from sandy flats to rocky foothills, including alluvial fans, washes and canyons where suitable soils for den construction might be found.

Tortoises have lived in the area that is now the Mojave Desert for millions of years, even before it was a desert. 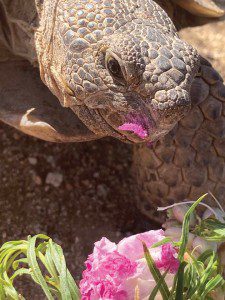 As recently as the mid-1900s, people commonly encountered these familiar, gentle creatures. Today, however, they are rarely seen and in some places they have disappeared entirely. The Mojave Desert tortoise was listed as threatened on April 2, 1990.

The vast majority of threats to the desert tortoise or its habitat are associated with human land use. The most apparent threats to the desert tortoise are those that result in mortality and permanent habitat loss across large areas. These include urbanization and large-scale renewable energy projects, as well as those that fragment and degrade habitats, such as proliferation of roads and highways, off-road vehicle activity, habitat invasion by non-native invasive plant species, wildfire, and subsidized predators (especially common ravens). These threats interact in complex and synergistic ways to impact tortoise populations.

The desert tortoise requires 13 to 20 years to reach sexual maturity, has low reproductive rates during a long period of reproductive potential, and individual tortoises experience relatively high mortality early in life. These factors make recovery of the species difficult. Even moderate downward fluctuations in adult survival rates can result in rapid population declines. Thus, high survivorship of adult desert tortoises is critical to the species’ persistence, and the slow growth rate of populations can leave them susceptible to extirpation events in areas where adult survivorship has been reduced. 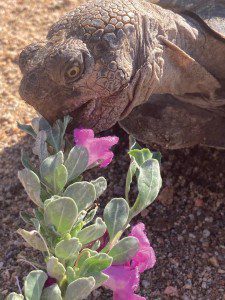 Another factor integral to desert tortoise recovery is maintaining the genetic variability of the species and sufficient ecological heterogeneity within and among populations to allow tortoises to adapt to changes in the environment over time.

Because desert tortoises occupy large home ranges, the long-term persistence of extensive, un-fragmented habitats is essential for the survival of the species. The loss or degradation of these habitats to urbanization, habitat conversion from frequent wildfire, or other landscape modifying activities place the desert tortoise at increased risk of extinction.

Desert tortoises love eating some of the native plants and forbs that grow here, and recent rains at NTC/Fort Irwin has energized plant growth. As a treat for the captive tortoises at DPW, wildlife biologist David Davis picked two bouquets.

We should leave wildlife wild and leave tortoises alone too. Only if they are in the middle of the road and in harm’s way, are we allowed to move them.

For more on how and when to move a desert tortoise, watch this video https://www.nps.gov/jotr/learn/na-ture/tortoise.htm.