Friends and family members were treated to a stable tour, a behind-the-scenes look at the work involved in caring for and training with the units’ Equine Troopers and a dynamic cavalry demonstration featuring both U.S. Army Troopers from 11th ACR and Marines from the Marine Corps Mounted Color Guard who performed various horsemanship techniques and maneuvers for cheering onlookers – including the use of sabers and revolvers while mounted and synchronized team jumping. 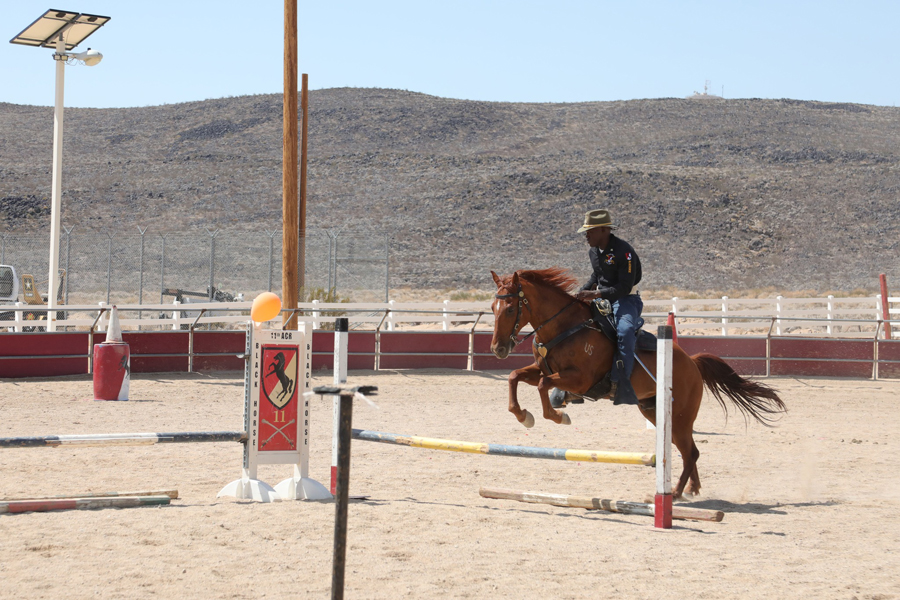 The 11th ACR Horse Detachment, one of six mounted U.S. Army cavalry units, and the last remaining active duty cavalry unit, provides ceremonial support for the regiment and shares the rich history of the original 11th Cavalry as it participates in equine competitions and events around the country. The Marine Corps Mounted Color Guard is the Marines’ only mounted color guard unit and also performs in parades, rodeos and ceremonies nationwide. 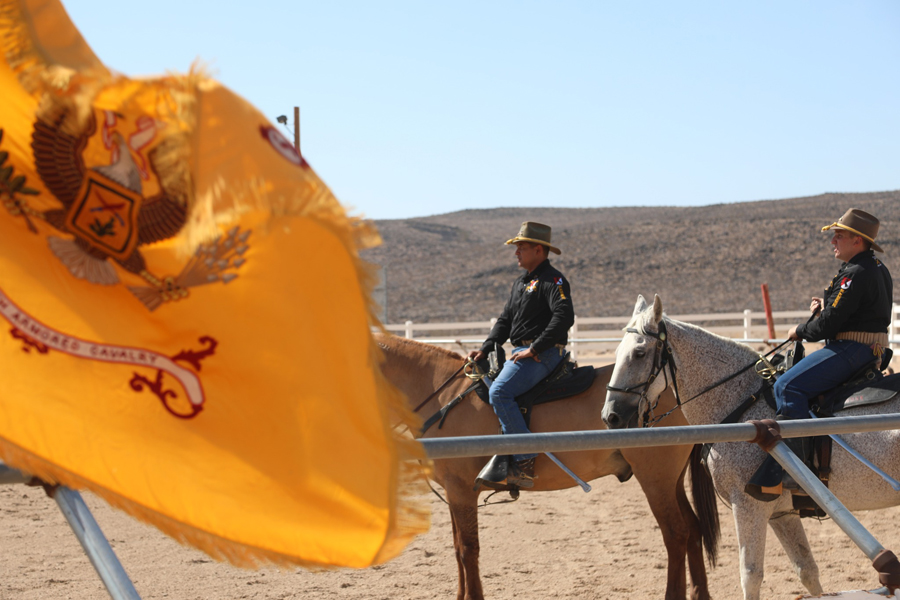 “Being able to link in with the Marines is one of the most unique opportunities that we’ve had,” said Capt. Michael Gates, 11th ACR Horse Detachment commander. “Training together, riding together, allows cohesion between Joint Force training [and] keeps the shared history of such a small group of mounted units relevant, alive, today.”
“Overall, it’s an important opportunity to highlight the mounted forces for the U.S. military,” Gates added.
Gates explained that as a Special Ceremonial Unit, community outreach events are an important part of the detachment’s mission.
“Fort Irwin is relatively isolated, but garrison and NTC leadership have done a great job of trying to offer more to the community. We are trying to do our own part out here with our unique skill set by hosting events for everybody,” said Gates. “Whether it’s kids, spouses, active duty service members– we want everyone to have the opportunity to get out here and see the cavalry demonstration … share our history.” 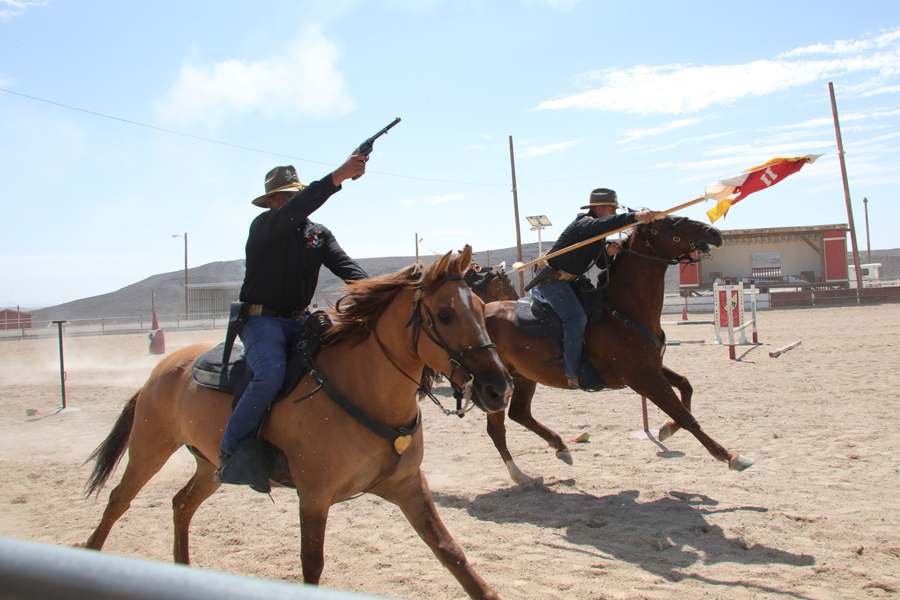 In order to fulfill the detachment’s demanding mission, which includes countless hours of rigorous training and the constant oversight of the health and wellbeing of both human and equine Soldiers, the horse detachment carefully selects just the right men and women for the job from within the 11th ACR “Blackhorse” Troopers ranks. While equestrian expertise is not required – and in fact, most Troopers have less than 18 months worth of equine experience – character, willingness to learn and a commitment to hard work are essential.
Likewise, Marines come to the stables of the Marine Corps Mounted Color Guard with little or no experience in horsemanship and are chosen based upon their demonstration of Corps values and the ability to work hard and represent the unit with honor. 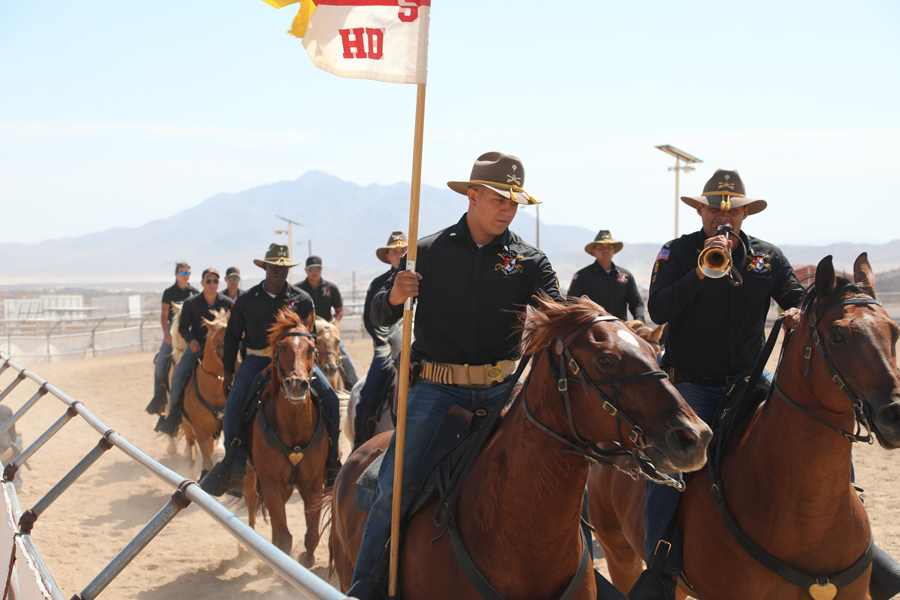 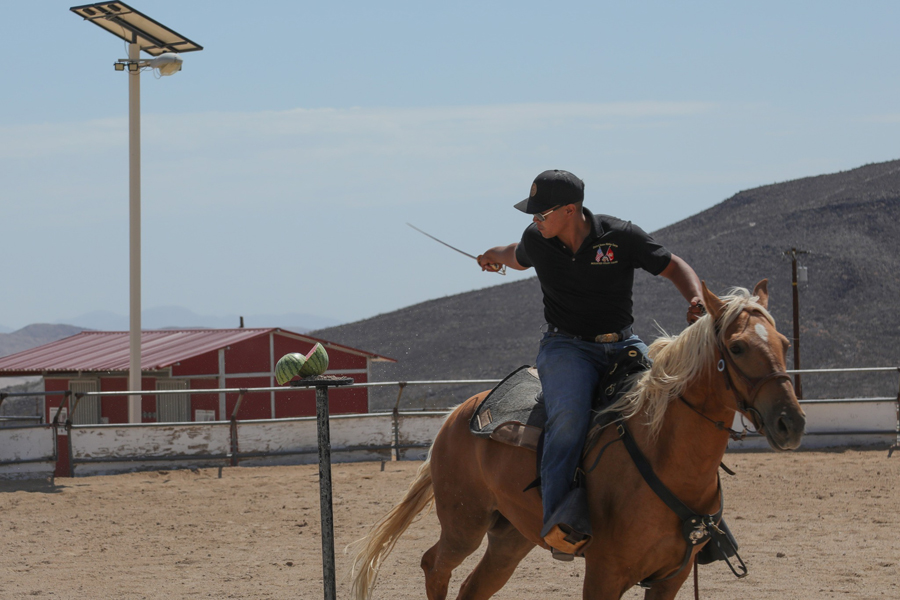 Leading up to the community event, Troopers exchanged knowledge and stories with visiting Marines as they rode and worked together. Sgt. 1st Class Christopher Stemple, 11th ACR Horse Detachment acting First Sergeant, coached the Troopers and their guests on saber techniques, incorporating the Marines into a joint forces cavalry demonstration.
“The best part of this exchange for me was being able to work on some different types of horsemanship we don’t usually get to do, like the saber work and the larger group rides,” said Cpl. Kyle Conrad, Marine Corps Mounted Color Guard, who participated in the event. “We don’t get a lot of opportunities to work with sabers, pistols, be around gun fire… popping balloons… It’s good exposure for these guys and good training for us.”
“It was really cool,” Conrad added. “I would definitely like to come out here again or see something like it on our side.” 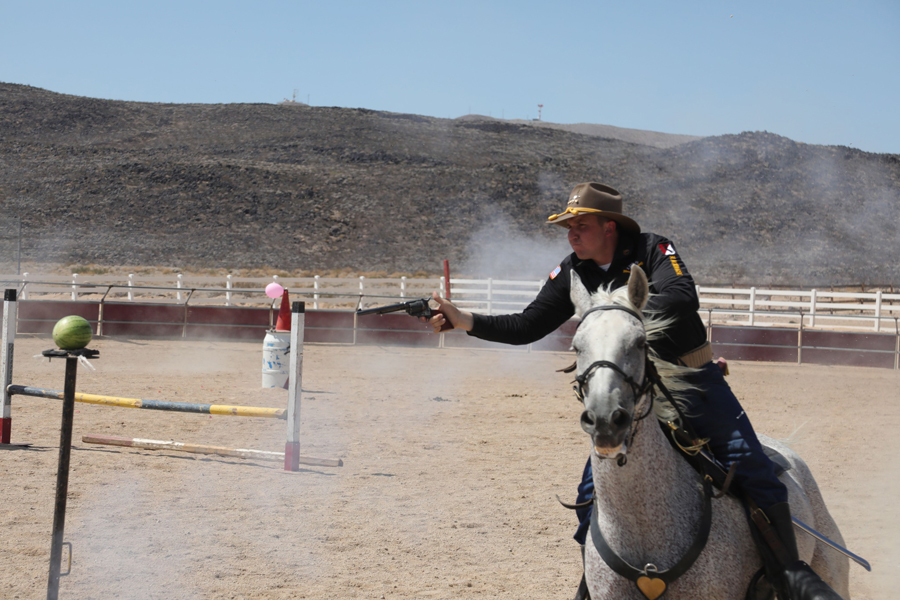 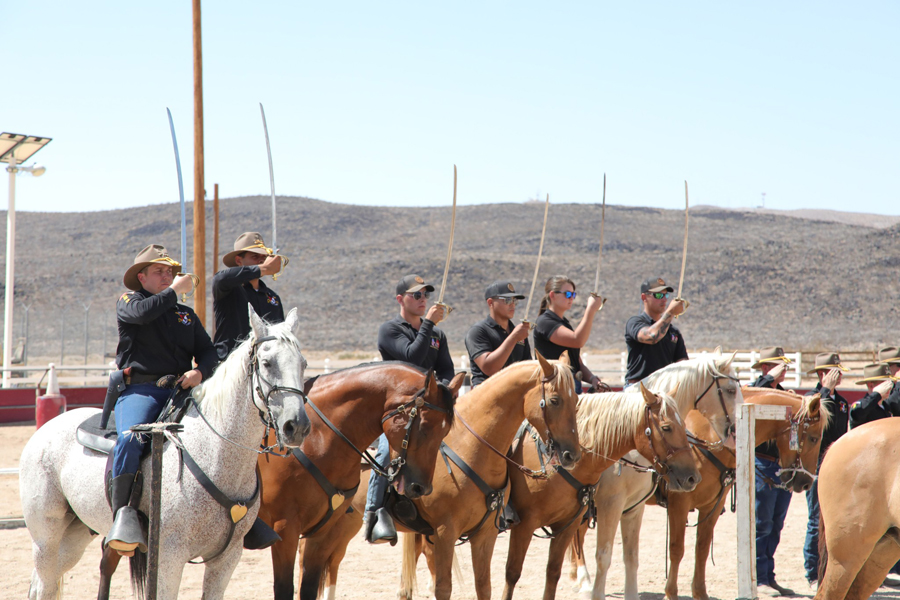 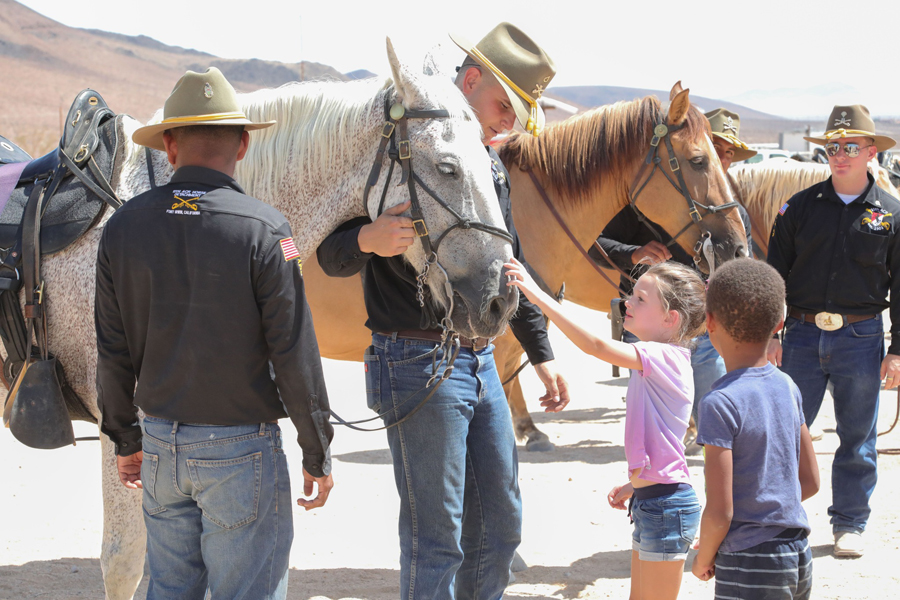 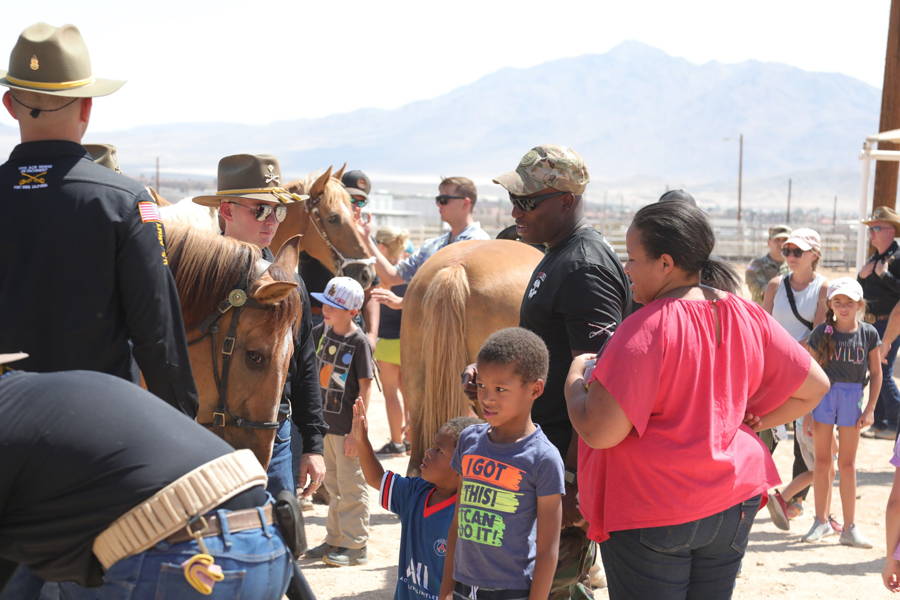 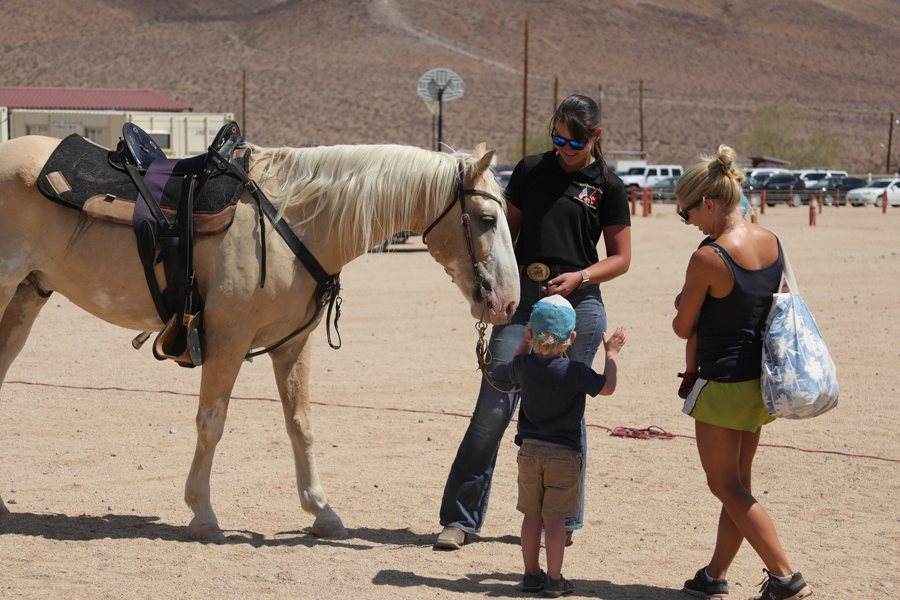 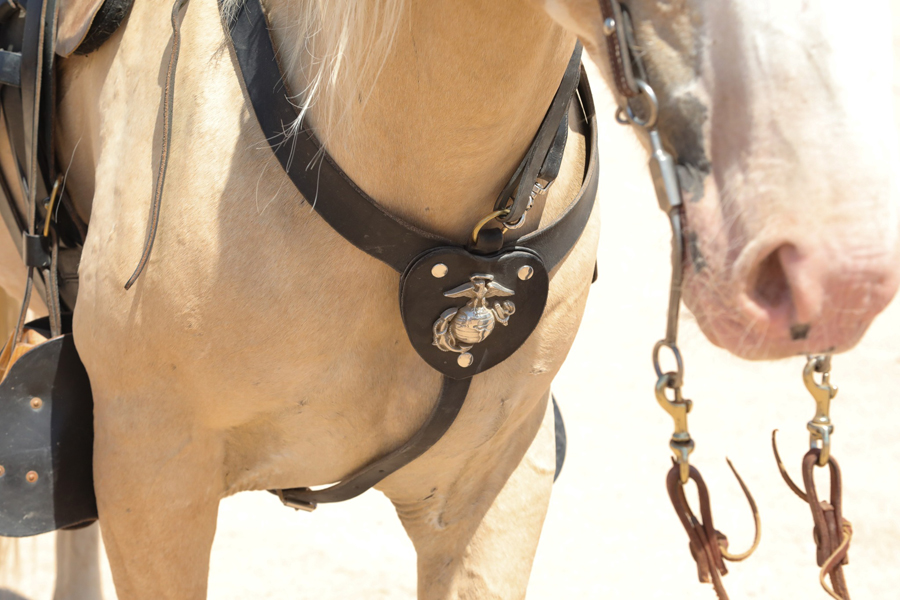