The 11th Armored Cavalry Regiment’s Horse Detachment sent 11 riders and four support staff to participate in the United States Cavalry Association’s Annual Bivouac and National Cavalry Competition at Fort Reno, Oklahoma, from September 21 to 24, 2022. Over the four days, Soldiers from four Army units and civilians from across the country engaged in five main individual events and one team event to demonstrate skills and proficiencies from the horse-mounted era. Each Trooper rode at one of three levels, loosely corresponding to 1 as intermediate, 2 as advanced, and 3 as expert. 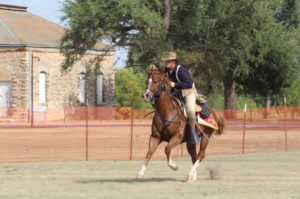 The five main events of the National Cavalry Competition each focused on a particular element of Army horsemanship. The first event, the Military Horsemanship Competition, is a display of techniques to standards set forth by U.S. Cavalry horse training manuals. The Combat Horsemanship Competition goes a step further and incorporates historic weapons assigned to the Cavalry Trooper. Two events, the Mounted Saber Competition and the Paul Scholtz Mounted Pistol Competition, named after the late Vietnam-era Blackhorse combat engineer and USCA chaplain, test proficiency with the respective weapons while navigating obstacles. Finally, the William Steinkraus Military Field Jumping Competition, named after the late Olympic champion, is a winding course studded with jumps and hurdles. Together, these contests demonstrate the Trooper’s expertise in utilizing their weapons, handing their horse, and employing mobility inherent in their mount.

The Major Howze Cross-Country Team Competition is an endurance event in which the teams maintain a given pace over a set distance, followed by a mounted saber charge. It is based on a movement made by a provisional squadron of the 11th Cavalry Regiment on May 5, 1916, in the vicinity of the village of Ojos Azules, Mexico, during the Mexican Punitive Expedition. Under the direction of Maj. Robert L. Howze, the “flying column” moved over 30 miles overnight to charge the village at dawn, inflicting over 80 enemy casualties and suffering none in return. This year’s course was a length of 5.7 miles with a given pace of 6 miles per hour.
The Bolté Cup, named for the late Brig. Gen. Philip L. Bolté and chairman of the USCA, is the comprehensive final event, with the highest scorer named the champion of the National Cavalry Competition. An invitation to participate is a testament to the rider’s mastery of Cavalry fundamentals. Seven 11th ACR Horse Detachment Troopers were invited to fill 14 slots.

The General Casimir Pulaski Trophy is presented to the most “Outstanding Military Unit,” as decided by the conduct and performance of its members. Named for Revolutionary War hero Brig. Gen. Casimir Pulaski, one of the two “Founding Fathers of the American Cavalry”, the traveling trophy is returned to the USCA each year to be awarded to the next unit. This year marks the fourth time in a row it has been awarded to the Horse Detachment. 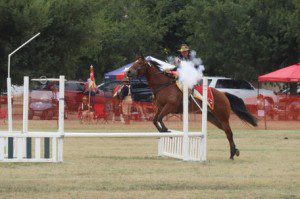 This year, the Artillery Half Section, out of Fort Sill, Oklahoma; B Troop, 4th Cavalry Regiment (Memorial), stationed at Fort Huachuca, Arizona; and the Mounted Color Guard, 4th Infantry Division, from Fort Carson, Colorado, were present to compete in the National Cavalry Competition. The Commanding General’s Mounted Color Guard, 1st Infantry Division, of Fort Riley, Kansas, sent representatives with the aim of joining next year.

Horse Detachment, Regimental Headquarters and Headquarters Troop, 11th Armored Cavalry Regiment, was activated as a Special Ceremonial Unit in 2001 to assist the military recruiting effort, broaden community relations, and aid military and civilian ceremonies. Slots in the Horse Detachment are open to all Troopers, regardless of Military Occupational Specialty. These mounted Troopers represent the 11th Cavalry as it appeared in 1901, and they are committed to keeping the history and traditions of the horse-mounted Cavalry alive today. During their single year assignment, Troopers care for and groom their mounts, learn to ride and use historic armaments, and represent the 11th Armored Cavalry Regiment and the United States Army, past and present, in a unique manner.