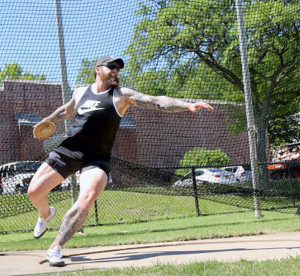 When Andrew Marr left his home of Argyle, Texas, to compete at the 2016 Department of Defense Warrior Games, winning his respective events of discus and shotput was not the first thing on his mind.

“Winning is a byproduct,” said Marr, a medically retired Special Forces combat engineer. “I always try to contribute and perform to the best of my abilities and by doing that, my hope is that it will inspire and encourage others to know that they can do the same.”

Marr’s journey toward becoming an inspiration to other wounded warriors began years ago when he suffered a Traumatic Brain Injury (TBI) after receiving enemy 107mm rocket fire during a combat mission in Wardak, Afghanistan.

“I came back to and we were in a fight, so there wasn’t really any time to think about it or talk about it,” said Marr. “And it was just part of the job, so I didn’t think much about it after that.

In addition to the rocket attack, Marr was continuously exposed to blast waves while performing his functions as a combat engineer.

“I was a breacher for our team. So, that means I put surgical explosive charges on denied points of entry,” said Marr. “Being that my specialty was explosives, I was around countless explosions — hundreds, if not thousands. Back then, we never made any correlation between head trauma and blast waves. It just wasn’t a thing, nobody knew anything about it.”

Eventually, the symptoms of his injury — memory loss, vision issues, migraines, lost vocabulary, and depression — led him to seek treatment for his TBI. During his journey, Marr says he crossed paths with a neuro-endocrinologist who not only drastically helped improve his condition, but in doing so inspired him to try to help others with the same condition.

In March 2015, he created the Warrior Angels Foundation, an organization dedicated to raising funds for the treatment for the condition of TBIs as opposed to simply treating the symptoms. To date, they’ve helped treat 120 combat veterans with TBIs and Post-Traumatic Stress symptoms.

One year after starting the foundation, Marr received a phone call from U.S. Special Operations Command (USSOCOM), asking him to participate in the DOD Warrior Games.

“I saw a great opportunity to train for something, to compete for something, but under the banner of hopefully challenging and inspiring others that are in the same or similar positions,” said Marr.

“It feels good to be competing in the games, because two years ago I had a difficult time — I was having double vision, balance issues … I was in bad shape, so performing at a high level, doing a rotational spin and throwing anything would have been out of the question. So to go from that physical and mental state to now being able to do at a competitive level, it is fulfilling.”

The Games kick off officially on June 15, 2016 and Marr will represent USSOCOM and create awareness of the Warrior Angels Foundation as he competes against teams representing the U.S. Army, Navy, Air Force, and Marines.

More information on the Warrior Angels Foundation can be found at WAFTBI.org.