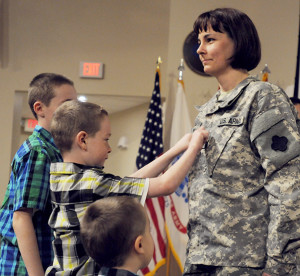 Sgt. Rachelle Witherow, 88th Regional Support Command, receives a promotion with the help of her three sons during a ceremony at the 88th RSC Headquarters on Fort McCoy, Wisc., April 3, 2015.

Military families have always faced challenges. Few are quite as demanding as a combat deployment. While combat is the Soldier’s mission alone, deployment is a family endeavor.

“Joining the military was something I had always wanted to do,” Rachelle said. “It was a tough decision to join the military while the children were small, but I also wanted my kids to realize that they needed to be able to follow their dreams no matter what.”

As challenging as it can be to balance two jobs, two military careers, three children, homework, sports practice and monthly battle assemblies, the family must now also accept the responsibility of serving their nation overseas.

Sgt. Rachelle Witherow will soon deploy overseas in support of Operation Freedom’s Sentinel as an ammunition sergeant with the 395th Ordnance Company out of Appleton, Wisconsin, but later this year, her entire family will face the challenge of deployment.

“I figured at some point I would deploy,” Rachelle said. “I came into a training unit to start with so it wasn’t really an immediate concern. But getting promoted into an actual line company, as soon as those orders hit, it was ‘all right, this is possibly go-time.’ It can happen at any point now.” 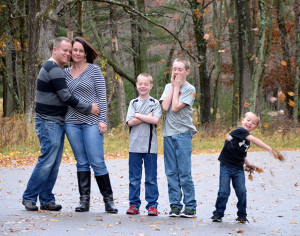 Bryan and Rachelle Witherow pose for a family photo with their children in the fall of 2015.

Although this will be the first deployment for the Witherow family, military service has been a part of their lives from the beginning. Bryan was already a member of the Army Reserve when he and Rachelle married, and their boys have grown up with military service, yearly training, and monthly battle assemblies as part of their daily lives.

“I was at my annual training in March, and we had a soldier fall off,” Rachelle remembered. “So they decided they needed another NCO to step up. So I stepped up right then. It was another two weeks before I was back home with my family to talk about the deployment.”

It was easier for her to accept the news while she was in uniform and in a military state of mind, but making the call to tell her husband wasn’t easy, even though both of them expected it. Bryan has concerns about Rachelle’s deployment, but he has an informed perspective.

“Being a soldier and going through some of the same stuff myself, I get it,” he said. “Some of the challenges and the questions and the worries a spouse might have that’s not in the military — a lot of those you already know the answer to, so it’s not as taxing on me emotionally.”

Despite her own concerns, Rachelle’s excitement has overruled her fear, for now.

“This is what we signed up to do,” she said. “As a Soldier, I’m excited to have the opportunity to lead other Soldiers … I’m not going to lie, I’m a little scared. It’s the unknown. I’ve never been there before, so,” Rachelle trailed off.

She has missed birthdays in the past, because of her service, and during her deployment she will miss another one, her eldest son’s, but her children are resilient. She is confident that, despite the challenges her family will face in her absence and the distance that will separate them, her children will be prepared — and proud. 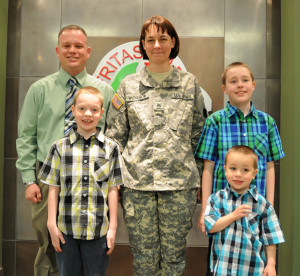 Sgt. Rachelle Witherow and her family pose for a photo after her promotion ceremony at the 88th RSC Headquarters on Fort McCoy, Wisc., April 3, 2015.

“They’re boys, so they ask things like ‘are you going to go play with guns this weekend?” Rachelle said. “I think being around it their entire lives with their dad being in the service, it’s just a way of life for them.”

“I’ll keep in touch with mom by letter,” her middle son added, “maybe by FaceTime, like at night before I go to bed, or right away in the morning, or maybe if mom has her phone and is able to text.”

“Mom is awesome in her uniform,” their youngest son said grinning, “and my dad is pretty cool because he has a new uniform.”
More seriously, he added, “Soldiers shoot, they protect us from the enemy soldiers.”

Then he asked his mom a tough question.

“Are they trying to kill you guys?” he asked.

Rachelle answered, “Depends on how bad they are.”

Rachelle paused and sat quietly with her youngest son on her lap for a few minutes before continuing.

“I think Bryan’s main concern is just making sure that the kids are taken care of, being there for them as much as possible,” she said. 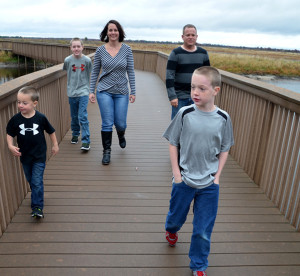 Bryan and Rachelle Witherow pose for a family photo with their children in the fall of 2015.

Bryan must attend training soon after Rachelle deploys. His mom will come to stay with the boys while he is gone and then stay on to help during the holidays.

Ultimately, Rachelle believes the deployment will the family, already a strong unit, even stronger. The family is from Washington State and somewhat new to the area. With just a few close friends nearby, they have had to rely on one another for support.

“We have had to hold each other up,” she said, “knowing where we were then, versus where we are now, knowing what we can do that we never thought we would be able to, you know, because we’ve had to just do it.”

Their oldest son spoke up again, “I think it’s kind of emotional because I’ve never gone through this part before, the overseas part. But I’m also used to it because dad has always had to leave for military stuff, too.”

“One of the biggest things,” Bryan added, “is that we are proud of her, proud of what’s she’s doing.”

Space Camp: Once in a lifetime experience