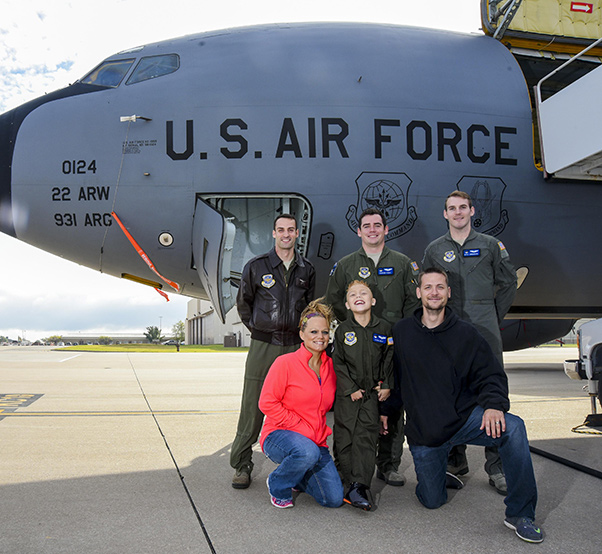 Tyson Gray, 10 years old, poses for a photo with his parents and air crew members of Team McConnell Nov. 8, 2016, at McConnell Air Force Base, Kansas. Tyson battles mild cerebral palsy and became the latest honorary member of the 344th Air Refuleing Squadron as part of the squadron’s “Pilot for a Day” program.

Typically, when a pilot arrives at their first duty station they’re in their early twenties with a college degree, but the 344th Air Refueling Squadron at McConnell Air Force Base, Kansas, made an exception for their newest pilot.

Tyson Gray, a 10 year old who battles mild cerebral palsy, became the latest honorary member of the 344th ARS as part of the squadron’s “Pilot for a Day” program, Nov. 8.

The squadron welcomed Tyson and his parents, Jen and Ryan Gray, to the base as a part of the 20-year-old program that allows children with severe or chronic conditions to experience what it’s like to be a pilot.

“It should be a fun day for Tyson; that’s the main goal,” said 1st Lt. Carson Fugal, 344th ARS co-pilot and Pilot for a Day coordinator. “I hope has the experience of a lifetime—seeing what a pilot does every day. I hope it’s a really good memory for him going forward.”

This is the first Pilot for a Day event since 2011; however, Fugal and members of the 344th ARS plan to host this event twice a year.

“We thought it would be amazing to revitalize this program,” said Fugal. “The community does so much for us here in the Wichita, Kansas, area, and it’s a great way to reach out and let them know we care. We wanted to give this young kid a day where he can come experience what we do on base, get a better understanding of our job and just give the kid a really good day.”

In addition to having mild cerebral palsy, Tyson suffers from seizures and has developmental delays. His parents hope this experience gives him a break from the challenges he faces. 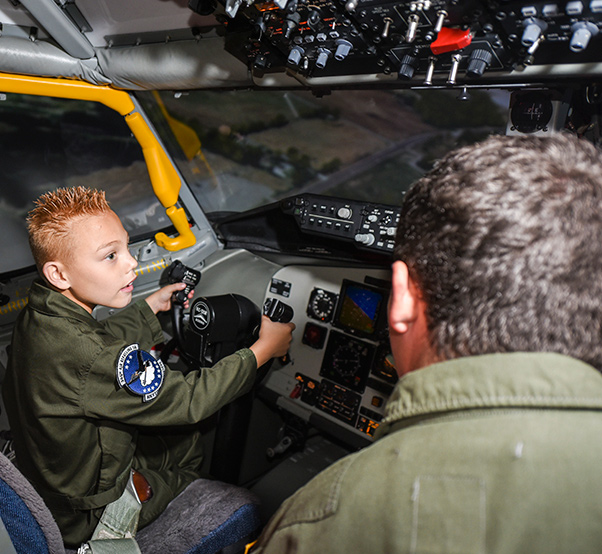 Tyson Gray, 10 years old, sits in the cockpit of KC-135 Stratotanker simulator while 1st Lt. Carson Fugal, 344th Air Refueling Squadron co-pilot and “Pilot for a Day” coordinator, observes Nov. 8, 2016, at McConnell Air Force Base, Kansas. The 344th ARS welcomed Tyson to the base as part of the first “Pilot for a Day” event since 2011. The squadron now plans to host this event twice a year.

“Tyson feels like big stuff today,” said Jen, Tyson’s mother. “He is so happy all the time. He is so active, and since he just falls short, he doesn’t get the opportunity to do amazing things like this.”

During the tour, Tyson visited the 344th ARS, toured a KC-135 Stratotanker, piloted a KC-135 simulator and was presented with patches and memorabilia from his time with the 344th ARS.

“He doesn’t get to do a lot of exciting things that regular kids can do,” said Jen Gray, Tyson’s mother. “He loves football. And his favorite thing to do before any football game is to sing the national anthem, so this is really cool to be here and experience the military pride. I couldn’t believe that this was an opportunity given to us, and we just want to thank [Team McConnell] so much.”