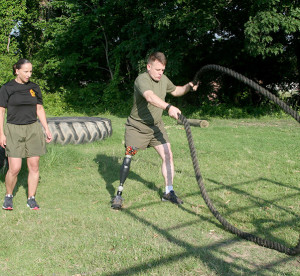 Marine Corps MSgt. Berle Sigman, a student in the Faculty Advisors Course at the Quantico Staff Non-Commissioned Officer Academy, completes a High Intensity Tactical Training physical training session aboard Marine Corps Base Quantico, June 27, with Master Gunnery Sgt. Amber Hecht, a lead instructor in the FAC. Sigman, whose original Military Occupational Specialty was 0369 Infantryman, will teach warfighting classes at the SNCO Academy after he gradutes from the course on June 29. He was injured in Ramadi, Iraq in 2004, leading to the loss of his leg.

“This seemed like a good way to give back to the Marine Corps and thank them for letting me stick around after I got wounded,” said MSgt. Berle Sigman, a student in the Faculty Advisor Course (FAC) at the Staff Non-Commissioned Officer (SNCO) Academy aboard Marine Corps Base Quantico, Va.

Sigman, who graduated from the three-week course June 29, was wounded in combat in October of 2004 in Ramadi, Iraq. He had been in the Marine Corps for 11 years at that point and was platoon sergeant for Weapons Company, 2nd Battalion, 5th Marines. The injury resulted in the loss of his leg.

“He could have easily been medically retired from the Marine Corps,” said Master Gunnery Sgt. Amber Hecht, Enlisted Professional Military Education (EPME) operations chief and Staff Non-Commissioned Officer in Charge of the Faculty Development Course. “But not only did he choose to continue to serve, he still wants to be a leader and give back to the institution and to the Marines. To watch this Marine fall down at [physical training] doing [High Intensity Tactical Training] and get back up with his prosthetic leg twisted backwards and hear him joke, ‘Well, guess I better straighten myself out’ is amazing. He has so much of the warrior spirit.”

Sigman said he never considered leaving the Marine Corps. “Being a Marine is just one of those things that you love,” he said.

He received his first prosthetic leg in December of 2004, only two months after the injury. He was walking on his own by February of 2005 and was “pretty much done” with physical therapy by early April of that year. Exactly one year after his injury, he went back to work at Systems Command aboard MCBQ.

He attributes his speedy recovery to having a sense of humor, to the physical therapists at Walter Reed National Military Medical Center and to his family, friends, and fellow Marines.

“I had visits from it felt like everybody,” he said. “The commandant [Gen. Michael Hagee] and assistant commandant [Gen. William Nyland] visited every week. Marines take care of each other.”

Now, Sigman wants to help Marines achieve their full potential as a faculty advisor (FA) for the SNCO academies.

“I hope I can open the door to other seriously injured guys,” he said. “I want to help them understand that any kind of adversity can be overcome—it doesn’t have to be quite as obvious as my injury.”

As an FA, his sphere of influence will be huge. Hecht said that 1,000 students pass through the SNCO Academy’s Sergeants Courses annually—and that’s just one of three courses the academy offers. The others are Career Course for staff sergeants and Advanced Course for gunnery sergeants.

MARADMIN 521/14, signed in October 2014, made Professional Military Education (PME) courses mandatory for enlisted Marines hoping for promotion. Besides Quantico, there are SNCO academies at the installations in Hawaii, Okinawa, Twentynine Palms, Camp Pendelton, and Camp Lejeune. However, there are not enough FAs to effectively instruct all the Marines needing further education.

“Some of the academies are sitting at only 67 percent manning,” Hecht said. “We are always looking for faculty advisors.”

There are 11 students in Sigman’s FA course; the capacity is 15. Hecht said the FA courses, which are offered four times a year, have not been filled to capacity in a year. She thinks Marines eligible to serve as FAs (there is a screening checklist available on the Marine Corps University website) do not consider the duty assignment because they are uncomfortable venturing outside their military occupational specialty to teach courses they might not be familiar with and because it isn’t officially considered a special duty assignment like drill instructor, recruiting, or Embassy Security Guard. Promotion boards look for special duty assignments on a Marine’s resume.

Hecht said that Sgt. Maj. David Maddex, Education Command sergeant major, is working with the Enlisted Assignment Branch to make the FA duty assignment one of the special duty assignments.

“This will be one of the topics of the Sergeant Major of the Marine Corps Symposium this summer,” she said. “This job is just as competitive as other special duty assignments. And at the FAC, we really give them time to learn.”

The FAC’s goal is to educate prospective FAs on the effective delivery and facilitation of EPME. FAs plan and lead PT sessions and lessons and small group activities that must relate to all military occupational specialties and all parts of the Marine Air Ground Task Force. FAs also provide personal counseling and mentorship to their students.

The schedule is busy, Hecht said, but the assignment offers many rewards, such as being in a non-deployable unit, being able to go home to family in the evenings and on weekends and holidays, being part of a close-knit community of faculty and staff who all have the same mission, and being able to educate and shape the Marine Corps’ future leaders.

When Sigman graduated from his FAC, he started a three year tour at the Quantico SNCO teaching warfighting classes.  He said he’s enjoyed the opportunity provided by the FAC to network with Marines from different military occupational specialties and “different walks of life.”

“I hope that me sticking around and being an example to other Marines shows that adversity doesn’t have to be the end of your career,” he said.