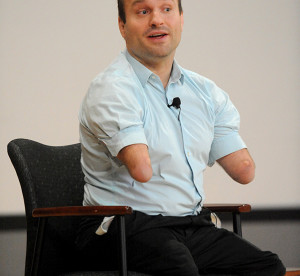 Speaking Sept. 13, 2016, at Kirtland Air Force Base, N.M., Kyle Maynard told the audience not to let difficulties define who they are, and to get in the right mindset to deal with tough emotions and face extreme challenges.

When Kyle Maynard was 10 years old, he was ready to end his life, having despaired of finding a future because he’d been born without arms or legs.
When he discovered a strength in football at age 11, things began to change.

At his first game, Maynard tackled a huge running back his teammates feared by crashing his helmet into the other player’s shins and hanging onto his leg as tightly as he could.

Speaking Sept. 13 at Kirtland Air Force Base, N.M., Maynard told the audience how much he appreciated and respected members of the military and the sacrifices they made. He spoke of a visit to Walter Reed National Military Medical Center.

“I learned more about the human spirit in 30 seconds there than in my entire life,” he said.

Maynard said the moments when we feel most alive and have the biggest sense of accomplishment are when we’ve been stretched and faced something scary.

Everyone has challenges, Maynard said, but no one has to let difficulties define them.

“The circumstances don’t matter,” he said. “It’s what we do with them.”

Maynard’s parents pulled “the ultimate Jedi mind trick” on him, he said, by telling him he wasn’t disabled, thus empowering him to achieve.

His father insisted the boy learn to feed himself with regular silverware. The first thousand times he tried, he dropped the utensil.

“There is no recipe for success that doesn’t involve consistent failure,” he said.

Maynard also lost his first 35 wrestling matches as a middle school student, finally winning one in his second season. He went on to be so successful in the sport, beating multiple state champions, that some people argued that he had an unfair advantage.

Now, he lives on his own in a San Diego apartment with no special accommodations except a barstool he uses to reach the bathroom sink. He uses a normal computer and iPhone, and drives a car modified only with extended brake and gas pedals.

Maynard said the heart, mind and soul are one thing instead of three.

“It’s a muscle like everything else, and it’s a muscle that has to be strengthened,” he continued.

As a child, the emotional implications of a disability were harder for him than the physical ones. Other children stared at him and repeatedly asked what happened to his arms and legs.

His grandmother took him grocery shopping to talk and practice meeting people.

She told him God doesn’t make mistakes and he’d someday find out why he was born without limbs. She also taught Maynard that when people heard his voice and shook his hand, his disability began to fade from their awareness.

“Every single person on the planet has a disability,” Maynard said, adding that some struggles even harder than his just aren’t visible.

He said people’s greatest challenges, vulnerabilities or failures can become their greatest strength, depending on their reaction.

“Now I truly believe being born the way I was is the greatest gift I’ve ever been given,” he said.

When he was 19 and unhappy as a traveling speaker, he met a group of wounded Iraq veterans who told him his story had affected their lives as they dealt with their serious injuries. He decided it would be selfish to give up his career.

From Uzbekistan to America: One airman’s tale

From Uzbekistan to America: One airman’s tale