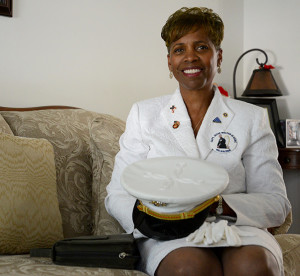 Right before his deployment to Afghanistan, Marine Capt. Jesse Melton III told his mother, “Mom, I want to go change the world and make a difference.”

At 29, Melton already made a big impact on his family, church and community. He learned to serve others at an early age and was inspired to serve in the military by his father and grandfather.

His life, however, was cut short during that fateful deployment in 2008. He and two other Marines were killed while supporting combat operations in the Parwan province. He was not scheduled to be on duty but took the place of a fellow Marine.

His mother Janice Chance, of Owings Mills, Md., saw his death as a platform to serve others. Calling her son “My Quiet Storm,” Chance saw firsthand the difference he made on others and wanted to continue the legacy of service he started.

“I cry, but I don’t drown in my tears, and I am determined not to be paralyzed by my pain. It’s a new normal for us [Gold Star mothers],” she said. “Nothing can replace the loss of a child, but you move forward and make a life of service.”

In 2009, Chance became involved with Army Survivor Outreach Services after she was contacted by a coordinator at Aberdeen Proving Ground, Maryland. SOS is the official Army program dedicated to providing support services to surviving family members, including those in other military branches. It is an Army Community Service program and is a part of the Installation Management Command’s G9 Directorate. 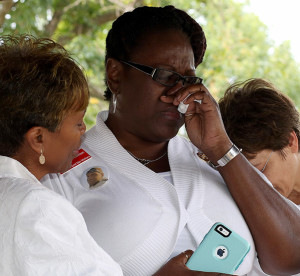 Chance was already familiar with the Army community. Although she is the surviving mother of a Marine, her daughter Jenine — inspired by her brother — became an Army officer and served two tours in Iraq before separating from service.

“Our children’s service stopped, but SOS is making sure that they are not forgotten and that we [the parents] are still in the Army family,” she said.

Chance began to attend SOS events and met other survivors at the Army installations in Maryland. She soon found herself helping them.

As the president and chaplain for the American Gold Star Mothers, Inc. Maryland Chapter, Chance worked with SOS coordinators in welcoming mothers new to the area and to the program.

“Because I’m the chaplain, I receive a lot of phone calls from moms who are facing challenges. I link them to the SOS coordinators,” she said.
In addition to SOS, Chance volunteered in her community. A retired registered nurse, she spends her days helping veterans through organizations such as the American Red Cross and Veterans Affairs Medical Healthcare System. In the last year, she estimated that she put in over 800 hours and drove over 8,000 miles to conduct volunteer work.

To Chance, volunteering is therapeutic.

“Grief turned in is destructive,” she said. “When I volunteer at Walter Reed [National Military Medical Center] and when I go the VA [hospitals], I can say mission complete for that day. I made a difference in someone’s life. I encouraged someone. I listen to them. I let them know that I appreciate their service and sacrifice. I think I’m more blessed than they are. I get more joy from serving. I have learned that it is more blessed to give than to receive.” 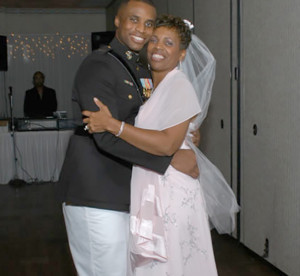 Marine Capt. Jesse Melton III dances with his mother Janice Chance during her renewal ceremony in 2005. After his death, Chance was inspired to carry on his legacy by serving the military community.

Chance’s work in the community does not go unnoticed. Voncile Farmer, the SOS support coordinator at Fort Meade, Md., first met Chance during a Gold Star Wives Day event in 2014. She saw how Chance helped other survivors with dealing with their grief.

Chance always remembers her son as “an officer and a gentleman.” She raised him to be a man of service and saw the impact he made on his family, fellow Marines and community members.

“It gives me great pride that my son died doing what he loved to do — serving and defending our country,” she said.

“Jesse wanted to go and change the world and make a difference. He did that wherever he served. The world is now being changed through me. I go out and continue to serve in Jesse’s honor. I’m inspired by him and all those who made the ultimate sacrifice.”