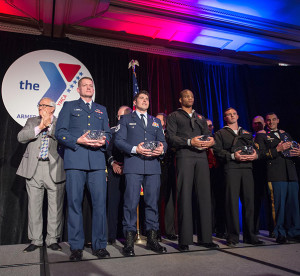 Hollywood war movies often illustrate someone yelling “medic” or “corpsman up,” as an overloaded service member begins assessing and treating the wounded.

It’s not a cliché if it really happens – in combat it happens often.

Last night the Armed Services YMCA honored medics, corpsmen and pararescuemen who exemplify the finest spirit of medical aid at the Angels on the Battlefield Gala. Marine Corps Gen. Joe Dunford, chairman of the Joint Chiefs of Staff, congratulated the awardees.

This marked the 10th year the Armed Services YMCA presented the award. It honors a medical professional from each service. Here are their stories:

Army
Army Sgt. 1st Class Daniel Lopez-Bonaglia is a medic now assigned in Washington. In 2004, he was deployed to Iraq. He said he previously had all the training, but had not proved himself as a medic until one day in Baghdad. Lopez-Bonaglia’s platoon was on a vehicle check point mission in February 2004. “We normally started our missions before dusk but this night we decided to start our mission a little after dusk and little did we know we made the wrong choice,” he said in describing the incident.

A five-vehicle convoy of Huvees crossed and intersection when they started taking gunfire. “Roll through the kill zone!, is what we heard over the radio. So, with weapons pointed out the window all five soldiers — driver included — were ready to face the unknown,” he said. “I happened to be on the side the firing was happening so all I could do was shoot my pistol and hope I hit the enemy with my 9mm bullet.”

After clearing the kill zone, the convoy halted. “I immediately dismounted the vehicle and went running to every vehicle to check on all the soldiers I was given the responsibility to take care of,” he said. “They were all right.”

The platoon then went back into the kill zone to check on Iraqi casualties. “When I arrived inside the house I was met by an Iraqi male and female who directed me to all the casualties,” the sergeant said.

A young man had a minor wound, but a 10-year old girl had a “gigantic hole” in her right shoulder. The young medic treated the wound.

The next day, a young man in Lopez-Bonaglia’s platoon shot himself. The medic again grabbed his bag and ran. He stabilized the soldier and got him on a medevac, but he died.

After a harrowing two days, the medic finally felt he had earned the term “Doc.”

Air Force
Air Force Tech. Sgt. Cody C. Inman is a pararescueman with the 212th Rescue Squadron in Anchorage, Alaska. He was a Marine Corps infantryman before joining the Air Force.

His crowded hour came in 2015 when he was supporting a special operations mission in Afghanistan. The team was on patrol when a senior enlisted man stepped on a pressure plate improvised explosive device. “Instantly, he was hurled to the ground and both legs near amputated,” Inman wrote in a description of the action.

Four others, including Inman, were also hurt in the blast. The pararescueman was suffering from traumatic brain injury but said he fell back on his training. “I initially ran to Harry and stopped the bleeding in his legs and began to package him for transport,” the technical sergeant said.

But the roadside bomb was just the start of a larger ambush and soon the team was taking gunfire. “I engaged the enemy as I was bounding back and forth from patient to patient. I was packing wounds for transport. I gave pain medications and I returned fire,” he wrote. “Bullets snapped and whizzed past as I stabilized my brothers. It was everything I had trained for since walking into pararescue indoctrination course five years prior.”

Coast Guard
Coast Guard Petty Officer 2nd Class Ryan Ransom is a hospitalman assigned to the Coast Guard Air Station in Sitka, Alaska. He was called to assist when an aircraft with five aboard went missing in mountainous terrain in July 2015.

Arriving on scene, the crew was initially unable to reach the crash site due to 600-foot ceilings and driving rain, a report on the event said. They eventually located the aircraft at an elevation of 1,300 feet on the side of a steep mountain pass scattered among trees towering 200 feet tall.

The rescue party dropped in about 100 yards away and made their way to the crash site down a 60-degree slope. “Once on scene, Petty Officer Ransom located four survivors, assessed their medical condition and determined three required immediate medical care,” the report said. “He quickly provided critical lifesaving treatment to stabilize two victims suffering from hypothermia and a third person with severe traumatic injuries,” it said.

They carried the victim to the only hoisting area available and transported three of the casualties to an emergency services facility. “Ransom was the sole medical provider during the transit to Juneau providing critical lifesaving treatment to the victims who were in shock and seriously injured,” the report said. “After delivering the victims to an awaiting emergency medical services for higher level care and transport to the hospital, the crew … again battled the weather transiting back the crash site to recover the remaining victim and rescue team members,” it said.

Throughout this search and rescue event lasting nearly five hours, Ransom displayed exceptional stamina, professional expertise and unwavering composure, according to the report. “His actions under duress and in arduous weather conditions directly resulted in saving four lives,” it said.

Marine Corps
Navy Petty Officer 2nd Class Nicholas Otazo received the award for his actions as a member of the 1st Battalion, 7th Marine Regiment, in Iraq last year. During his tour at Al Taqaddum Air Base, Iraq, an attack produced 39 Iraqi casualties. “Upon arriving at the scene, he immediately began treatment on a possible spinal injury,” a report said. “Next, he tended to a patient with a gunshot wound to the leg. Next, he moved on to a patient with a suspected femur fracture,” the report said.

The young sailor worked diligently to stabilize those affected and – despite the language barrier – managed to comfort and assure those hurt. He assisted in transporting them to Iraqi medevac for a higher echelon of care, according to the report.

This was just one of four mass casualty incidents during his time at the base. In addition, he served as the sniper platoon corpsman, patrolling the perimeter of the base.

He is now preparing for Basic Underwater Demolition/SEAL training.

Navy
Seaman Elgie O. McCoy Jr., received recognition for his quick thinking during an incident in Okinawa, Japan. The corpsman was on duty when a call came in saying there was an unconscious patient. He jumped into the ambulance and sped off. On the way he heard that chest compression had begun and the ambulance drove even faster. Upon arrival, they assessed the patient and broke out the automatic external defibrillator, but the machine signaled “no shock advised.”

“Since our location was so far from the U.S. Naval Hospital Okinawa, we decided to divert to the nearest hospital,” McCoy wrote in a report. “Seconds felt like hours, and the only thoughts going through my mind were of saving his life.”

He conducted patient turnover as the crew carried the patient into the emergency room. “Later we found out our patient survived,” McCoy wrote.