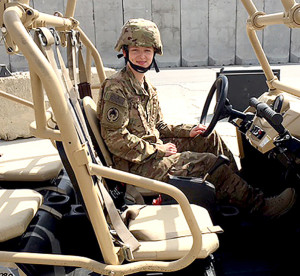 Air Force Airman 1st Class Corynn Marcelo sits in a military vehicle used by the medical team she was assigned to during her deployment to Afghanistan, Oct. 5, 2016. A medical logistician from Robins Air Force Base, Ga., Marcelo was deployed to Camp Vance.

The first thing you notice about Air Force Airman 1st Class Corynn Marcelo when she talks about her recent deployment to Afghanistan is her professionalism and military bearing.

She carries herself like a seasoned veteran and speaks with a quiet authority usually reserved for older, more experienced troops. Yet there’s something that just doesn’t seem to fit.

It’s only when the Flint, Michigan, native tells you about how she came to the decision to join the Air Force that it dawns on you.
She’s only 21.

Wanting something different
Like countless other young Americans, Marcelo has family who served in the military, and she tried a bit of college before deciding she really wanted something different — something challenging. So, she enlisted in the Air Force to create a new life for herself, and she found it here with the 78th Medical Group, where she works in medical logistics.

It’s a job she’s proud of, and one she’s quick to point out helps to keep the group running.

Marcelo had been married for only a couple of months when she got her first deployment orders last year. Her husband’s deployment soon followed, and both have since returned to Robins.

“I was actually excited [to deploy],” Marcelo said. “[In] our job field, we don’t get to deploy very much, and I wanted to deploy at least once in my career to get the experience.”

It was a long haul from here to there. A six-day journey with four stops, flying on three different aircraft. It marked the beginning of a five-and-a-half-month deployment that she said would change her outlook on life.

Marcelo said it was easy to work with them, though their accents and slang took a little getting used to. 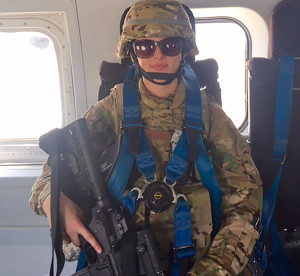 Air Force Airman 1st Class Corynn Marcelo straps into a helicopter for the first time, leaving Camp Vance and heading to Camp Morehead with her team’s command surgeon and senior medic during her deployment to Afghanistan, Aug. 3, 2016. Marcelo is a Flint, Mich., native and serves as a medical logistician assigned to the 78th Medical Group at Robins Air Force Base, Ga.

Her day-to-day tasks began with morning sick call. This was a change for her, she said, because she’d usually handled logistics and normally didn’t work with patients. After sick call, it was business as usual she added, doing whatever task was required for the rest of the 10-hour shifts she worked seven days a week. Something else that became business as usual, she said, was the sound of alarms and sirens going off with a resounding, “Incoming! Incoming! Incoming!”

Enemy attacks
The regular attacks made Marcelo very appreciative of the alarms, and of the U.S. firepower designed to remove the threat.

“It was scary [and] loud. … It makes you realize that counter-rocket, artillery, mortar-intercept-based weapons are a very good thing,” she said with a knowing grin. “When they shoot them out of the sky and the remnants come down, it’s a lot better than the entire indirect fire landing.”

Now that she has lived through it, Marcelo said, she knows exactly what she would tell another airman with an impending first deployment.

“When you’re back at home, if there are different sections in the job you do, try to rotate to as many as you can,” she said. “I was lucky that I was able to, because when I deployed I was the only logistics person, but I did every job. If I wasn’t able to get the chance to work in all those sections [at Robins], I don’t know if I would’ve been equipped to do it over there.”

She said the experience broadened her perspective. “I feel like I made a difference … going out there and being able to support the mission,” she said.

When she got the news that she was returning home, Marcelo said, it was an amazing feeling. And since she has returned, she added, people have asked her about joining the military.

“Every time, I tell them it was the best decision of my life,” she said. “You get to meet new people and see new places — do things you couldn’t really do if you just went to college and stayed at home.”